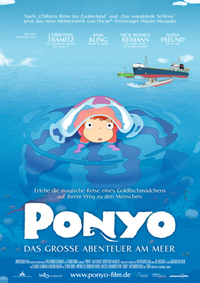 While inspired by the Hans Christian Andersen story, 'The Little Mermaid', Ponyo's plot instead centers on a rather less glamourous goldfish-girl who also longs to become human. Beautifully hand-drawn, written and directed by Japanese legend Hayao Miyazaki (Spirited Away, Howl's Moving Castle), the English version stars Cate Blanchett, Matt Damon, and Liam Neeson among others.