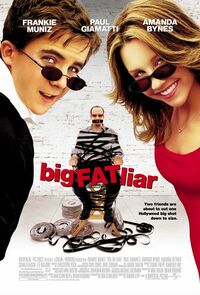 Jason Shepherd (Frankie Muniz), a 14-year old living in the fictional town of Greenbury, Michigan, is an incorrigible liar and a con artist. When his English teacher, Ms. Phyllis Caldwell (Sandra Oh), assigns her class a creative writing assignment, Jason does not complete it. His parents are later called into school, where Ms. Caldwell tells Jason that if he can’t bring her a handwritten story at the community college by 6:00pm, she will not consider it a valid contribution.

After remembering that his father told him that “making up stories appears to be his God-given talent”, Jason finally writes a story entitled Big Fat Liar, a take on how he lies all the time. Now finished, he rides his sister’s old bicycle and collides with the limousine of an arrogant Hollywood producer named Marty Wolf (Paul Giamatti), whereupon Jason blackmails Wolf into giving him a ride to school. During Jason’s ride, Wolf reveals he is also a liar and con man, but a more professional one than Jason. When the limousine reaches the college, Jason hastens out of the limo, not realizing that he has dropped his story behind. Wolf is about to give it back to him, when he sees that the story is excellent, and decides to keep it.

Upon entering school, Jason realizes that he does not have the story. Neither his parents nor Ms. Caldwell believe him when he claims to have written it, and he is therefore ordered to undergo summer school. Later, Jason and his best friend Kaylee (Amanda Bynes) found out that Wolf has plagiarized Jason’s composition by making his film Big Fat Liar. When Jason’s parents and older sister leaves town for a summer holiday, Jason and Kaylee use their savings to fly to Los Angeles to confront Wolf, leaving a local bully named Brett (Taran Killam) to attend Kaylee’s absent-minded grandmother after Jason bribed him by promising to do Brett’s summer school homework for him. Jason and Kaylee trick limo driver Frank Jackson (Donald Faison) into giving them a ride. At the studio, Jason tricks the receptionist into leaving her post to allow Jason to speak with Wolf. Wolf agrees to return the story, but suddenly burns it and has Jason and Kaylee removed from his office.

In response to the incident, Jason and Kaylee plan to inconvenience Wolf until he admits to having stolen Big Fat Liar. Frank joins them in their scheme as he is an actor formerly mistreated by Wolf. After gathering intel about how he treats his workers, Frank takes Jason and Kaylee to Wolf’s mansion, where they add blue and orange dye to Wolf’s swimming pool and shampoo, giving him blue skin and orange hair. Kaylee, impersonating the studio president’s secretary, sends Wolf to a child’s birthday party to get vengeance for veteran stunt coordinator Vince (Lee Majors), an elderly employee of Wolf whom he criticized, who had wanted to take his granddaughter to the same party. There, Wolf is mistaken for a clown and attacked by the children. Meanwhile, Jason and Kaylee modify the controls to Wolf’s blue Jaguar XKR convertible, causing various controls to perform the incorrect function and playing the song “Blue (Da Ba Dee)” by Eiffel 65, resembling his blue skin. Struggling to control his convertible, Wolf stops just behind a monster truck, but is then rear ended by a vengeful old lady, who he had insulted earlier, which causes him to crash into the monster truck, therefore causing the monster truck driver (John Gatins) to destroy his car in anger.

As a result of these pranks, Wolf misses his appointment with Marcus Duncan (Russell Hornsby), president of the studio. Wolf later meets Duncan at a party celebrating the premiere of another film Whittaker and Fowl, which proves to be a box office failure. Duncan distrusts Wolf to create anything better and tells him that all the funding for Big Fat Liar will be withdrawn unless Wolf can convince him otherwise. Duncan also warns Wolf that should any mishap occur during production, the film and Wolf’s career will be terminated. Jason agrees to help Wolf in exchange for a confession of the truth to his father. Wolf, guided by Jason, makes a successful presentation, but betrays Jason yet again as he calls his guards and has Jason and Kaylee removed a second time, but this time for good. Jason and Kaylee are told by the head of security, Rocko, that they will be forced out of Hollywood, cover up the incidents they caused, and be sent back to their hometown in disgrace. Jason is about to accept defeat and prepares to be forever humiliated and disbelieved in his hometown when Wolf’s secretary, Monty Kirkham (Amanda Detmer), appears after dismissing Rocko, who was keeping an eye on the duo, and states that because many of Wolf’s co-workers and employees (including herself, Jaleel White, the old employee, and others) have been abused by Wolf, they are willing to help Jason and Kaylee take revenge against him. Together, they all devise a plan by which to do so. By now, Wolf has removed or concealed the blue color of his skin.

En route to the studio, Wolf falls into several traps organized by his former co-workers including skydiving out of a helicopter piloted by Vince and getting soaked from the Universal Studios Hollywood flash flood backlot prop. Upon arriving at the studio, bedraggled and desperate, Wolf found out that Jason has taken his beloved toy chimpanzee, Mr. Funny-Bones, hostage. He pursues Jason until they reach a climactic rooftop confrontation, where Wolf admits to stealing Jason’s story, thinking they are alone. Immediately, it is revealed that he has been filmed throughout the confession with multiple cameras. As a result, he is exposed and shamed before all those whom he has abused, including Duncan, who is outraged at Wolf for his act of plagiarism, and from a kid, nonetheless. Jason thanks Wolf for having taught him that “the truth is not overrated”. Enraged, Wolf chases Jason, but Jason then runs off the side of the building and lands on an inflated crash pad. Duncan fires Wolf, and Jason and his parents re-establish their trust.

In the epilogue, Big Fat Liar is later re-produced and shown in movie theatres across North America, utilizing the talents and skills of all those whom Wolf had abused. During the closing credits, Jason is credited for having written his original story, and Ms. Caldwell is very proud of him. Meanwhile, Wolf declares bankruptcy and started his new job as a clown, for which his role he is assigned to entertain the son of the monster truck driver, whom he insulted earlier. Recognizing him, the driver, grinning, orders his son: “Yo, Little Mash, show him your nutcracker!”, a newly-learned prizefighting technique as a means of avenging the earlier offense. He delivers a striking blow to Wolf’s groin, rendering him incapacitated.