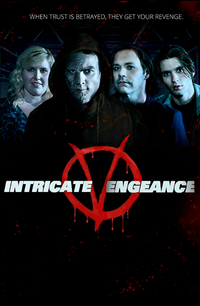 Four survivors of violent crimes form a dark web market dedicated to producing real-life revenge fantasies for justice-starved clients. They follow a strict code of an eye for an eye, ignoring their own compulsions for revenge and revealing themselves to the public.

Intricate Vengeance is a 2016 television drama pilot created by Wilson Cleveland and directed by Mark Gantt for New Form, the digital studio co-founded by Ron Howard, Brian Grazer and Discovery Communications. The project was announced on April 5, 2016 during New Form’s presentation at the annual MIPTV Media Market and released on YouTube as part of New Form’s Incubator Three Series of scripted pilots. The show revolves around four survivors of violent crimes who form a dark web market dedicated to producing real-life revenge fantasies for justice-starved clients.

Intricate Vengeance received a 2016 Telly Award for Best Drama and generally favorable reviews from critics. In his April 9, 2016 Ain’t It Cool News review, Muldoon wrote, “Wilson Cleveland’s built an interesting first episode that’s got me eager to see what’s next for this bizarre group of individuals.”