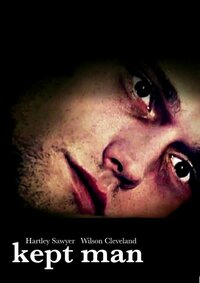 Newly-single Jake is sitting alone in a bar, mourning the end of yet another relationship when he's approached by Brian. The two fall in love fast, move in together and appear to be living the life of a happy couple. When Brian's mental state takes a drastic and dangerous dive, Jake is forced to care for the man he loves and soon fears the most.

Kept Man is a 2014 psychological thriller directed by Brett Annese and written by Wilson Cleveland, who also stars. The film, set in Los Angeles is a two-hander depicting the intense relationship between Cleveland’s character Jake and his new boyfriend, Brian played by Hartley Sawyer who is losing his grip on reality. The film was released for Halloween on October 31, 2014 on YouTube. A second cut of the film featuring three additional scenes was released for Valentine’s Day on February 14, 2015 on Amazon Prime Video and Vimeo On Demand.

The film received generally favorable reviews from critics. In his December 9, 2014 IndieWire review, Joseph Ehrman-Dupre called Kept Man “a moody, mysterious, and shocking film” with “a twist you know is coming, but you won’t guess it” and NewMediaRockstars’ Evan DeSimone credited the film as being “perfectly constructed to keep the viewer off balance.” Viewer ratings were less favorable. The film’s aggregate user rating on its IMDb page is 5.4 out of 10.

On May 19, 2015 the International Academy of Digital Arts and Sciences honored the film with a 2015 Webby Award for Individual Short.