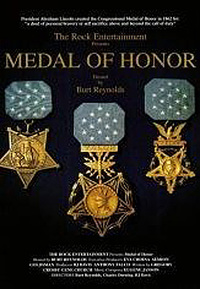 No categories have been entered yet.
add Help

Hosted by Academy Award nominee Burt Reynolds (TV Series – episodes continuing). Medal of Honor is America’s highest military award, authorized by President Lincoln on March 25, 1863 for bravery above and beyond the call of duty. Since that time there have been over 3,000 recipients, including one woman, a twelve year old boy, a father and son, a US President, Wild West legend, Buffalo Bill Cody, Texas Ranger Ed Wood, one conscientious objector, Alvin York in WWI, Desmond Dossin in WWII, with nineteen (19) two-time recipients. (Sequel to Medal Of Honor (2000 – 2002) ongoing television series 2007 – 2012)