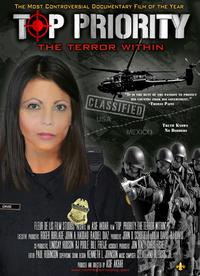 Top Priority: The Terror Within

Federal officer with the Department of Homeland Security discovers a national security breach related to the entry of 23 aliens from terrorist countries into the United States that remain at large, to date. Customs and Border Protection Commissioner, former head of the DEA Robert Bonner can’t afford any more media scrutiny, since his incompetence was already exposed in the NASA ‘Challenger’ disaster. To avoid the scandal, the full might of the government is unleashed against Julia Davis, her family and witnesses. Contrived state and federal, selective and malicious, failed prosecutions. This retaliation reaches an unprecedented magnitude, surveillance, sneak and peek burglaries, including four unexplained deaths, Hollywood and the Mafia, false imprisonments and the use of not one, but two Blackhawk helicopters and airplanes for warrantless surveillance. Documented facts in litigation and on-camera depositions of the manpower, waste and taxpayer dollars funding this kind of retaliatory corruption. All detailed in the daily dairies of the federal perpetrators obtained in litigation discovery. Amidst many shocking revelations, this documentary provides a new insight into the deaths of well-known Hollywood figures unwittingly dragged into this scandal. The truth is no longer a secret.