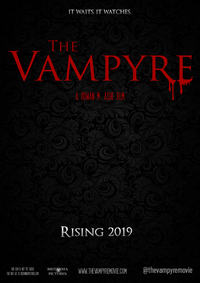 not released
no votes yet
edit Help

No actors have been entered yet.
add Help

A young Englishman and his sister fall prey to a dark and malevolent force.

The Vampyre follows a young Englishman and his sister who fall victim to the control of a mysterious aristocrat, Lord Ruthen. With his sister promised to Ruthven, Aubrey is taken under his wing as he travels the continent with his host. Arriving in Italy Aubrey becomes worried about Ruthven’s increasingly foolish antics and they part ways. Aubrey continues his journey, visiting Greece where he falls for an Athenian girl named Ianthe. Sinister events follow Aubrey and the sudden arrival of Ruthven after a creature attacks a local village leads to further suspicions. With his ever increasing power over Aubrey and his family and Ruthven’s undeniably monstrous behaviour, can they escape his clutches?