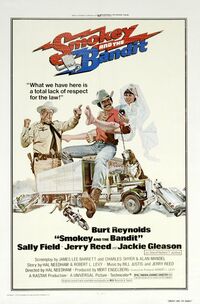 Smokey and the Bandit

As the movie begins, rich Texas wheeler and dealer Big Enos Burdette (Pat McCormick) and his son, Little Enos (Paul Williams), are trying to find a truck driver willing to haul Coors beer to Georgia for their refreshment. Unfortunately, due to federal liquor laws and state liquor tax regulations of the time, selling and/or shipping Coors east of the Mississippi River was considered bootlegging, and the truck drivers who had taken the bet previously had been discovered and arrested by “Smokey(s)” (truck driver and CB slang for highway patrolmen). At a local truck rodeo, the Texans locate legendary truck driver Bo “Bandit” Darville (Burt Reynolds) and offer him US$80,000 (US$283,000 in 2009 dollars), the price of a new truck, to haul 400 cases of Coors beer from Texarkana, Texas (the easternmost part of the country where Coors was legal) to the “Southern Classic” truck rodeo in Georgia— in 28 hours, driving a total of 1324 miles. Bandit accepts the bet and recruits fellow trucker Cledus “Snowman” Snow (Jerry Reed) to drive the truck (Snow brings along his dog, a Basset Hound named “Fred”, for company). After requesting an advance from the Burdettes for a “speedy car”, Bandit purchases a black Pontiac Trans Am, which he will drive himself as a “blocker” car to deflect attention away from the truck and its cargo.

The duo reach Texas ahead of schedule, load their truck with Coors, and immediately head back towards Georgia. Shortly thereafter, Bandit picks up professional dancer and apparent runaway bride Carrie (Sally Field), whom he nicknames “Frog” because she was “always hopping around”, and that “he would like to jump her”. However, by picking up Carrie, Bo becomes the target of Sheriff Buford T. Justice (Jackie Gleason), a respectable law officer of over thirty years seniority, whose handsome yet very simple-minded son Junior (Mike Henry) was to have been Carrie’s groom.

The remainder of the film is essentially one big high-speed chase, as Bandit and Frog attract continuous attention from local and state police while Snowman barrels eastward with the Coors beer. Despite leaving his home jurisdiction, Sheriff Justice and his son continue to pursue Bandit, even as various mishaps cause their squad car to disintegrate around them, causing the vehicle’s roof to come off and Junior to hold his father’s hat on his head the whole way. Bandit and Snowman are greatly assisted by a number of colorful characters met along the way, many of whom are truckers they contact through their CB radios; these acquaintances allow them to escape police pursuit on numerous occasions. Neither Justice nor any of the other police officers are ever aware of Snowman’s illegal cargo of Coors.

Despite near-constant police pursuit and several roadblocks, Bandit, Snowman, Frog and Fred arrive at the Southern Classic with a full trailer of Coors and ten minutes to spare, underscored by “Marching Through Georgia” as their vehicles roar into the grounds. Instead of taking their payoff, they accept the Texans’ new offer to drive to Boston and bring back clam chowder in 18 hours, double or nothing. As they are leaving for Boston in one of Big Enos’ Cadillacs (leaving him an even dozen), they see Justice’s badly damaged car on the roadside. Bandit calls Justice over the radio, and, after a brief bit of mutual respect (begrudgingly by Justice), Justice angrily demands to know where he is. Bandit describes himself as Big Enos in order to put him on a false lead, but then decides that Justice is “too good a man” and tells him, “Look over your left shoulder.” As Bandit and his friends drive off, Justice shouts “I’m not giving up!” and resumes his pursuit as pieces drag from his battered patrol car, while his son runs behind him, begging his father not to leave him behind, saying, “Who’s going to hold your hat?”.