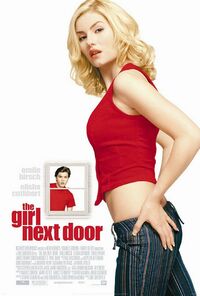 The Girl Next Door

Ambitious Westport High School senior Matthew Kidman dreams of a career in politics. He has been accepted to prestigious Georgetown University, but will only be able to afford it if he can win a large scholarship. With graduation approaching, he struggles to find anything truly memorable about his high school experience. However, his luck changes when he meets his beautiful next door neighbor Danielle. The outlandish Danielle and the steady Matthew each turn out to be the perfect complement for the other, and they are immediately smitten with one another. However, the relationship is challenged when Matthew discovers through his porn-enthusiast friend, Eli, that Danielle recently was an adult film actress under the stage name “Athena”.

Matthew, riddled with guilt, follows Danielle to Las Vegas to find her performing at an adult film convention, where Kelly menacingly warns Matthew not to interfere with his business. When Matthew convinces Danielle not to rejoin the industry, Kelly abducts Matthew from school and physically assaults him, saying that Danielle’s failure to arrive on set has cost him $30,000. Kelly offers to let him erase his debt by breaking into rival producer Hugo Posh’s home to steal an award statuette, but after Matthew has entered the house Kelly calls in a robbery report and leaves the premises. Caught by Posh, Matthew narrowly avoids the police and rushes to his scholarship award dinner. High on ecstasy that Kelly told him was aspirin, he improvises a deeply sentimental speech but loses out on the scholarship to a student who resembles nothing so much as the passionless, pre-Danielle version of Matthew.

Kelly then gets his money back by stealing the $25,000 Matthew raised to bring Samnang, a brilliant Cambodian student, to study in the United States. Not wanting to explain his connections to the adult film industry, Matthew had previously introduced Kelly to the bank staff as his student advisor. Although Matthew has done nothing wrong, he still fears that he will face expulsion or criminal charges for his unwitting role in the fraud, and he turns to Danielle for help. Danielle calls in a few friends from her days as a porn star, and they agree to make a video for Hugo Posh on prom night and on school grounds. After the successful shoot, and after Eli has been dropped off with the tape’s master copy, Danielle and Matthew have sex for the first time in their limousine. Despite Danielle’s past, it is the first time she has truly made love, and the moment is tender and significant for both of them.

The next morning Matthew is shocked to find Kelly, in possession of the tape he has stolen from Eli’s home, with his parents and school principal at the dining room table. Kelly asks to speak privately with Matthew and says that unless he is given half of all profits, he will play the tape immediately. Matthew, following Danielle’s repeated advice to “just go with it”, refuses because the money rightfully belongs to Samnang. Kelly repeats his threat, but Matthew stands up for himself and dares him to show the tape, stating that he no longer cares about his now-ruined future. As the tape begins to play, it becomes clear that Matthew and his friends have made a progressive, comprehensive sex education tape rather than a pornographic film. With no more cards left to play, Kelly finally and grudgingly admits defeat but smiles at Matthew’s initiative.

Hugo Posh and Matthew make millions from the video. Hugo Posh keeps his word and pays for Samnang to come to the USA, while Matthew has enough money to attend Georgetown and take Danielle to DC with him. Matthew sends Kelly a box of Cuban cigars, which he happily accepts. The final scene shows Matthew driving into Georgetown University in a BMW Z4. Matthew’s story ends with him getting the girl of his dreams and a chance at the future he has always wanted.