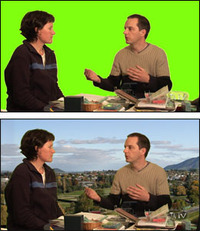 Chroma key is a technique for blending two images, in which a color (or a small color range) from one image is removed (or made transparent), revealing another image behind it. This technique is also referred to as color keying, colour-separation overlay (CSO; primarily by the BBC[1]), greenscreen, and bluescreen. It is commonly used for weather forecast broadcasts, wherein the presenter appears t

Prior to the introduction of digital compositing, the process was complex and time consuming known as “traveling matte”.

In 1950, Warner Bros. employee and ex-Kodak researcher Arthur Widmer began working on an ultra violet traveling matte process. He also began developing bluescreen techniques: one of the first films to use them was the 1958 adaptation of the Ernest Hemingway novella, The Old Man and the Sea, starring Spencer Tracy. 2

The background footage was shot first and the actor or model was filmed against a bluescreen carrying out their actions. To simply place the foreground shot over the background shot would create a ghostly image over a blue-tinged background. The actor or model must be separated from the background and placed into a specially-made “hole” in the background footage. The bluescreen shot was first rephotographed through a blue filter so that only the background is exposed. A special film is used that creates a black and white negative image — a black background with a subject-shaped hole in the middle. This is called a ‘female matte’. The bluescreen shot was then rephotographed again, this time through a red and green filter so that only the foreground image was cast on film, creating a black silhouette on an unexposed (clear) background. This is called a ‘male matte’.

The background image is then rephotographed through the male matte, and the shot rephotographed through the female matte. An optical printer with two projectors, a film camera and a ‘beam splitter’ combines the images together one frame at a time. This part of the process must be very carefully controlled to ensure the absence of ‘black lines’. During the 1980s, minicomputers were used to control the optical printer. For The Empire Strikes Back, Richard Edlund created a ‘quad optical printer’ that accelerated the process considerably and saved money. He received a special Academy Award for his innovation.

One drawback to the traditional traveling matte is that the cameras shooting the images to be composited can’t be easily synchronized. For decades, such matte shots had to be done “locked-down” so that neither the matted subject nor the background would move at all. Later, computer-timed motion control cameras alleviated this problem, as both the foreground and background could be filmed with the exact same camera moves.

Petro Vlahos was awarded an Academy Award for his development of these techniques. His technique exploits the fact that most objects in real-world scenes have a color whose blue color component is similar in intensity to their green color component. Zbig Rybczynski also contributed to bluescreen technology.

Some films make heavy use of chroma key to add backgrounds that are constructed entirely using computer-generated imagery (CGI). Performances from different takes can even be composited together, which allows actors to be filmed separately and then placed together in the same scene. Chroma key allows performers to appear to be in any location without even leaving the studio.

Computer development also made it easier to incorporate motion into composited shots, even when using handheld cameras. Reference-points can now be placed onto the colored background (usually as a painted grid, X’s marked with tape, or equally spaced tennis balls attached to the wall). In post-production, a computer can use the references to adjust the position of the background, making it match the movement of the foreground perfectly.

In the past decade, the use of green has become dominant in film special effects. The main reason for this is that green not only has a higher luminance value than blue but also in early digital formats the green channel was sampled twice as often as the blue, making it easier to work with. The choice of color is up to the effects artists and the needs of the specific shot. Red is usually avoided due to its prevalence in normal human skin pigments, but can be often used for objects and scenes which do not involve people.

Weathermen often use a field monitor to the side of the screen to see where they are putting their hands. A newer technique is to project a faint image onto the screen.

The principal subject is filmed or photographed against a background consisting of a single color or a relatively narrow range of colors, usually blue or green because these colors are considered to be the furthest away from skin tone. The portions of the video which match the preselected color are replaced by the alternate background video. This process is commonly known as “keying”, “keying out” or simply a “key”.

In digital color TV, color is represented by a triple of numbers (red, green, blue). Chroma key is achieved by a simple numerical comparison between the video and the preselected color. If the color at a particular point on the screen matches (either exactly, or in a range), then the video at that point is replaced by the alternate background video.

A chroma key subject must not wear clothing similar in color to the chroma key color(s) (unless intentional), because the clothing may be replaced with the background video. An example of intentional use of this is when an actor wears a blue covering over a part of their body to make it invisible in the final shot. This technique is used in the Harry Potter films, to make Harry’s cloak appear to be invisible. Background

Blue is generally used for both weather maps and special effects because it is complementary to human skin tone. However, in many instances, green has become the favored color because digital cameras retain more detail in the green channel and it requires less light than blue. Although green and blue are the most common, any color can be used. Occasionally, a magenta background is used.

With better imaging and hardware, many companies are avoiding the confusion often experienced by weather presenters, who must otherwise watch themselves on a monitor to see the image shown behind them, by lightly projecting a copy of the background image onto the blue/green screen. This allows the presenter to accurately point and look at the map without referring to monitors.

The most difficult part of setting up a bluescreen or greenscreen is even lighting and the avoidance of shadow, because it is ideal to have as narrow a color range as possible being replaced. A shadow would present itself as a darker color to the camera and might not register for replacement. This can sometimes be seen in low-budget or live broadcasts where the errors cannot be manually repaired. The material being used affects the quality and ease of having it evenly lit. Materials which reflect light will be far less successful than those that do not. A plastic sheet will reflect light and have a hotspot in the center which will come out as a pale area, while the edges may be darkened. A cotton sheet will absorb more light and have a more even color range. Recently a much simpler and easier way to create an evenly lit background has been developed. By using screens made from a retroreflective fabric illuminated by a ring of LEDs around the camera lens it is possible to produce very even bright blue or green backgrounds whilst only consuming around five watts. Products such as Reflecmedia’s Chromatte and LiteRing systems enable chroma key backgrounds to be created very simply and quickly, freeing the user to concentrate on lighting the foreground creatively. The systems are extremely energy efficient and enable users to create virtual studios in areas where space and energy are at a premium.