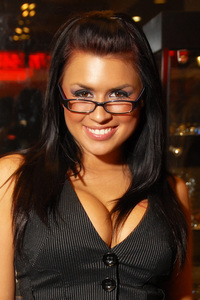 Eva Angelina (born on March 14, 1985) is a former American pornographic actress and adult model. She began her career at 18 and has won several industry awards, including the 2008 AVN Award for Best Actress (Video).

Angelina is known for wearing glasses during her performances. She had said on film shoots she gets sent home to get them if she forgets to bring them with her, and during a visit to one AVN Awards show she wasn’t recognized as she wasn’t wearing her glasses. They are prescription glasses, as she is “very blind”.

In late 2005, Eva considered joining the US Navy.

She has also done mainstream work, appearing as an extra in shows such as 7th Heaven and Cousin Skeeter.

Angelina retired from the business by 2010.