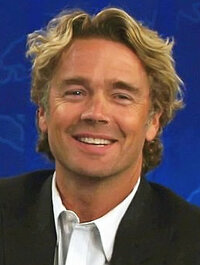 John Richard Schneider III (born April 8, 1960) is an American actor and singer. He is best known for his portrayal of Bo Duke in the 1980s American television series The Dukes of Hazzard, and as Jonathan Kent on Smallville, a 2001 television adaptation of Superman.

Schneider can be seen on several episodes of the FX Network show Nip/Tuck as “Ram Peters”, the owner of a pornographic film company. Also, from February to March 2008, he performed as Billy Flynn in the Musical Chicago on Broadway.

Schneider is also known to television audiences as Jonathan Kent, the adoptive father of Clark Kent on the hit show Smallville, starring in 100 episodes before his character was killed off. Schneider also directed episodes of Smallville, including S3E20 and Talisman, which received a respectable 8.8 rating out of 10 on TV.com. Some Smallville episodes contain references to Schneider's other work in The Dukes of Hazzard. Schneider also guest starred for the latter half of Smallville: Season 5 appearing in the episodes 'Void' and 'Oracle'.

Schneider has appeared in many films and TV series, including 5 guest spots on Hee Haw and the miniseries 10.5. He had a recurring role on Dr. Quinn, Medicine Woman and guest-starred on such shows as Diagnosis: Murder, Touched by an Angel, JAG and Walker, Texas Ranger. He also appeared in the national tour of the Broadway musical The Civil War as a Confederate soldier. John's other stage-work includes Oklahoma!; he auditioned for, but did not get, the role of Erik in The Phantom of the Opera.

Schneider has also been mentioned in other media such as the South Park episode “Terrance and Phillip: Behind the Blow”, in which an episode of Terrance and Phillip was aired in place of the popular fictitious show The John Schneider Variety Hour, causing outrage.

In 2007, he was among a series of celebrities involved in television ads for the Zaxby's restaurant chain.

In 2008, Schneider portrayed a villain (a rarity for him) on the series CSI: Miami, in the episode “Tunnel Vision”.

In 2009, he made an appearance on the series CSI in an episode titled “Kill Me If You Can”. He played the spouse of a murder victim; the murder was later confirmed as a suicide.

On November 9, 2009, Schneider appeared briefly in an episode of Curb Your Enthusiasm. He played half of a couple whom Larry David meets, in the episode “Officer Krupke”.

Schneider appeared in the first season of The Secret Life of the American Teenager, in which his real-life son Chasen Schneider had a recurring role. During the summer of 2008 and early 2009, John portrayed “Marshall Bowman”. He declined to continue through the second season, so in one episode, his character would die in a plane crash.

Schneider appeared on June 16, 2010, on the pilot of the TV Land sitcom Hot in Cleveland as Melanie's date, Hank.

He will return for the season 10 premiere of Smallville, reprising his role as Jonathan Kent and may be in one other episode later in the season.

In 2010, Schneider appears as a corrupt music executive in Season 3 Episode 6 of the TV show Leverage.

In 2010, he voices Preston Stormer in the HERO Factory TV series.

In 2010, he appears in several episodes of Desperate Housewives as a retired military man and father of the love interest of a main character.

In November 2010, he began to appear in a series of UK adverts for Little Chef, where he plays a centaur who refuses to buy into the great value of Little Chef breakfasts.

In Spring 2011, he will star in the film Doonby, as a drifter who comes into a small town and makes it better. However, a menacing force stalks him. “It's It's a Wonderful Life without the wonderful part,” Schneider explains. ”'Reach down into the throat of It's a Wonderful Life, pull it inside out and make a movie out of it.”