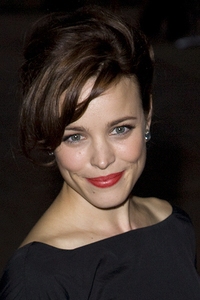 Rachel Anne McAdams (born November 17, 1978) is a Canadian actress. Her breakout role was for portraying the "Queen Bee" Regina George in the 2004 hit film Mean Girls.

dams played a leading role in the film The Hot Chick alongside Rob Schneider, but her most noticeable breakthrough role was when she starred as Regina George, the school’s popular prom queen, in 2004’s Mean Girls. She was much older than the character she played. McAdams had previously appeared in the Canadian television series Slings and Arrows, co-starring Paul Gross. She played a main role in the first season, but due to her rising stardom was written out of the second season, appearing in only the first episode. She followed Mean Girls with the film adaptation of Nicholas Sparks’ novel The Notebook, with Ryan Gosling, with whom she would later begin an off-screen romance.

In 2005, she played Owen Wilson’s love interest in Wedding Crashers and then starred in the suspense thriller Red Eye as Lisa Reisert, where she played a young woman held captive aboard a red-eye flight by criminal-for-hire and assassin Jackson Rippner (Cillian Murphy). McAdams also starred in The Family Stone where she was part of an ensemble cast alongside Diane Keaton, Craig T. Nelson, Sarah Jessica Parker, Dermot Mulroney, Luke Wilson, Brian J. White and Claire Danes. She auditioned for the role of Sue Storm in Fantastic Four, but lost the part to Jessica Alba.

McAdams’ career slowed down in 2006. She was originally signed on as the female lead in The Last Kiss but had to drop out due to scheduling conflicts, and the role was given to Jacinda Barrett. She decided to take a year off from acting, to spend time with friends and family. McAdams then agreed to star in the drama Married Life with Pierce Brosnan and Patricia Clarkson. She turned down the role of Bond girl Vesper Lynd in the James Bond film Casino Royale and as well as Anne Hathaway’s role in Devil Wears Prada and a significant role in Mission Impossible III. She stated in an interview in May 2006 that she did not want to star in a big-budget action film because she wanted to pursue other projects and only projects she was passionate about.

McAdams opted out of a cover shoot for Vanity Fair — in which she was to appear alongside two other young Hollywood actresses, Scarlett Johansson and Keira Knightley — upon finding out it was to be nude. When McAdams appeared on set and discovered it was nude, she politely declined, according to Knightley.

In her interview with PARADE Magazine, McAdams states, “When you’re playing a fictional character, it’s as normal and mundane as eating breakfast. What bothers me is our culture’s obsession with nudity. It shouldn’t be a big deal, but it is. I think this overemphasis with nudity makes actors nervous. There’s the worry about seeing one’s body dissected, misrepresented, played and replayed on the Internet.”

Rachel McAdams had a busy 2009, starring in 3 major studio releases. She first starred in the political thriller State of Play alongside Academy Award winners Ben Affleck, Russell Crowe and Helen Mirren. Production wrapped in April 2008 and the film was released theatrically April 17, 2009.

McAdams also played the title role of Clare Abshire in The Time Traveler’s Wife opposite Eric Bana, which was released on August 14, 2009. The film was based on Audrey Niffenegger’s 2003 novel of the same name. Later in 2009, McAdams starred in Guy Ritchie’s film Sherlock Holmes, based on Sir Arthur Conan Doyle’s classic stories. McAdams played the role of Irene Adler alongside Robert Downey, Jr. and Jude Law. Filming began in October 2008. Sherlock Holmes was released on Christmas Day 2009.

McAdams co-starred with Diane Keaton, Harrison Ford and Jeff Goldblum in Morning Glory, released on 10 November 2010. The movie opened in fifth place for the opening weekend, grossing $9.2 million. McAdams has widely been praised for her role has Becky Fuller in Morning Glory. and there has been talk that she could secure a Golden Globe nomination.

McAdams is a keen golfer and attended all four days of the Ryder Cup at Celtic Manor in Wales.

McAdams is involved in three upcoming projects: Woody Allen’s next film Midnight in Paris, due in 2011; The Vow, alongside Channing Tatum, due in 2012; and an upcoming Terrence Malick film, rumoured to be titled The Burial. All three are currently in post-production.