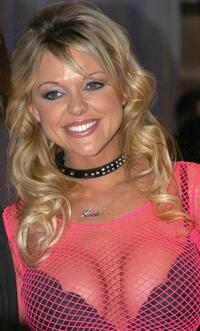 Adams was born in St. Louis, Missouri, and raised in rural East Texas. “I grew up in Pickton, Texas, population 90, with no phone, one TV channel and no one to play with for miles.” At age 16, Adams enrolled at a nearby community college to complete her last two years of high school.

Adams left Texas for Los Angeles, and began her career as a pornographic actress. On January 8, 2001, she appeared with Ed Powers in More Dirty Debutantes 186. She later referred to the experience of making that film as “nothing I want to remember”.

Adams became popular with fans, and signed a two year contract with Vivid Entertainment in August, 2002, officially becoming a “Vivid Girl.” The contract required Adams to appear in 8 movies per year, for the company.

In 2002, Vivid hired Adams to star in Debbie Does Dallas: The Revenge, with plans for her to star in future films in the series. Vivid representatives considered Adams to be appropriate for the role, because of her blonde hair, her experience with football, and her Texas heritage.

Adams was nominated for Best Actress by AVN in 2003. In 2004, she won the award for Best Oral Sex Scene – Film for Heart of Darkness.