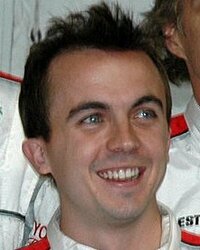 Francisco James "Frankie" Muniz IV (born December 5, 1985) is an American actor, musician, and racecar driver. He is known primarily as the star of the FOX television family sitcom, Malcolm in the Middle.

Fox premiered Malcolm in the Middle on January 9, 2000, as a mid-season replacement, and the show was quickly overcome with accolades. The premiere episode was watched by 23 million people and the second episode by 26 million. Muniz anchored the show with his narration and central role in many of the series' plots, although he has said that he does not consider himself a comic actor and does not find himself loved. He was nominated for the Emmy Awards in 2001, and was honored with the Hollywood Reporter “Young Star Award” for his work in the series.

Throughout his television career Muniz made guest appearances on the shows Lizzie McGuire, Sabrina, the Teenage Witch, and MADtv. His first starring role in a feature film was as Willie Morris in the 2000 family period piece My Dog Skip, released around the same time as the pilot for Malcolm In The Middle. That same year, he played the voice of Domino in the 2000 video game, 102 Dalmatians: Puppies to the Rescue. He was featured on the video game Stargate Worlds.

The following year, he contributed a voice to the animal cast of the film Dr. Dolittle 2. He had a moderate hit with the 2002 release Big Fat Liar, which teamed him with teen actress Amanda Bynes as a pair of students seeking revenge on a sleazy movie producer (Paul Giamatti). He was also part of the ensemble for the gang film, Deuces Wild, released that same year. In 2003, he made a cameo appearance as Cher's underage boyfriend in Stuck on You. That same year, he appeared in the series premiere of Ashton Kutcher's MTV practical joke series Punk'd, in which Kutcher pranked Muniz into thinking that his car had been stolen.

Muniz subsequently played the title role in the film Agent Cody Banks, as well as its sequel, Agent Cody Banks 2: Destination London. The first film opened in March 2003 and grossed $47 million; the sequel, which opened a year later, grossed $28 million. Muniz trained in martial arts for the films, and performed most of his own stunts; he also commented that it was the point in his career where he should “make the transition from child actor to an adult actor or a respectable actor.”

Muniz had a cameo in the 2003 comedy Stuck on You and voiced a racing zebra, Stripes, in the 2005 film Racing Stripes. That same year, he made a guest appearance as himself in “Mr. F”, an episode of the Fox comedy Arrested Development. In April 2006, Muniz began filming My Sexiest Year, an independent film in which Harvey Keitel played his father. The same month, Muniz announced he was taking a break from acting to pursue a career in race car driving, with a full-time two year deal with Jensen Motorsport in the Formula BMW competition.

“ Growing up has never scared me until last year. I started thinking about getting older, being an adult, and it scared me. Hopefully things will work out in my career. If they don't, then it was never meant to be.”

Despite his earlier stated intention to take a break from acting, in May 2006, he signed on to star in the R-rated, teen sex comedy Extreme Movie. The film was originally planned to be released in 2007 by Dimension Films, but was ultimately released straight to DVD in February 2009.

In late 2007, he made a significant guest appearance in an episode of the popular and critically acclaimed CBS crime drama, Criminal Minds. The episode, entitled “True Night”, featured Muniz playing a famous comic book writer who becomes a violent serial killer that preys on a group of local gang-bangers after they force him to watch while they rape and murder his pregnant fiancee. In December 2007 he made a cameo appearance in the movie Walk Hard: The Dewey Cox Story, playing Buddy Holly.