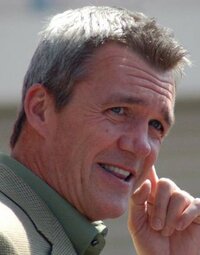 Neil Richard Flynn (born November 13, 1960) is an American actor and comedian, known for his role as Janitor in the medical comedy drama Scrubs. He also portrays Mike Heck in the ABC sitcom The Middle.

During his time in Chicago, he acted with the renowned Goodman and Steppenwolf Theaters. Flynn was nominated for a Joseph Jefferson Award (Actor in a Principal Role, for The Ballad of the Sad Cafe, 1986). He also performed at the Improv Olympic and the Second City Comedy Troupe.

Flynn originally auditioned for the role of Dr. Cox but was given the role of Janitor instead. In Scrubs, Flynn was originally only cast for the first episode (“My First Day”) but was so popular he became a regular, playing a character known only as Janitor who devotes much of his energies to menacing young Dr. John “J.D.” Dorian.2 Although his role on Scrubs had been to that point the most visible, he had other small roles in a variety of different TV shows and movies, including That '70s Show, Baby's Day Out, CSI, My Boys, Seinfeld, and Smallville.

He played a Chicago Transit Authority police officer in The Fugitive. This role was used in a subplot of the Scrubs episode “My Friend the Doctor” when J.D. (Zach Braff) notices Flynn's character in the film, and believes that Flynn's Janitor character is the actor in the film. In 2008, he worked with Harrison Ford again, playing a suspicious law enforcement official as FBI agent Smith in Indiana Jones and the Kingdom of the Crystal Skull. Flynn also appeared briefly in the 2009 box-office bomb All About Steve, which featured Sandra Bullock.

Flynn had a minor role in Mean Girls as the father of Lindsay Lohan's character. He then played the part of an anonymous police officer in Anchorman: The Legend of Ron Burgundy; this scene was cut out of the final version of the film, though it can be viewed in the straight to DVD spin-off film Wake Up, Ron Burgundy: The Lost Movie, and in the deleted scenes of the Anchorman DVD. He had a minor role in Major League as a longshoreman and fan of the Cleveland Indians. Flynn had a role on Phil Hendrie's animated pilot that wasn't picked up by FOX. He was also the first baseman in the movie Rookie of the Year.3

Flynn once appeared in an episode of The Drew Carey Show, playing the fake husband of future Scrubs co-star Christa Miller. He appeared on an episode of Seinfeld, playing a police officer. He has also done voice acting for the animated series Buzz Lightyear of Star Command, though he is better known for voicing the popular characters Skidd McMarx and the Plumber in the first three Ratchet & Clank games for the PlayStation 2 . He also was the voice of a fashion policeman in Kim Possible.

He filmed a pilot called The Middle. In case it wasn't picked up he signed a second position one-year deal for Scrubs season nine. The Middle was picked up, although he did guest star in the season 9 premiere of Scrubs.