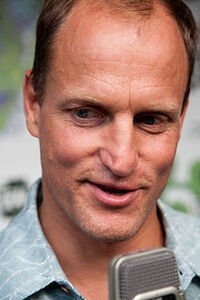 The Other Side
show all movies

While still working on Cheers, Harrelson pursued a film career. His first movie had been Wildcats, a football comedy in 1986 with Goldie Hawn. Harrelson reunited and became friends with Wesley Snipes and starred with him in the box-office hits White Men Can’t Jump and Money Train.

In 1993 he had a starring role opposite Robert Redford and Demi Moore in the drama Indecent Proposal, which earned him a worst supporting actor Razzie Award. After that film’s success, Harrelson played Mickey Knox in Oliver Stone’s Natural Born Killers and Dr. Michael Raynolds in the Michael Cimino film The Sunchaser. In 1996, he starred in the comedy Kingpin alongside Randy Quaid and Vanessa Angel.

Harrelson’s career gained great momentum when he starred in the Milos Forman film The People vs. Larry Flynt, in which he played Larry Flynt, publisher of Hustler magazine. The film was a success and Harrelson’s performance was nominated for a Golden Globe Award and an Academy Award for Best Actor.

After that, Harrelson was cast in more serious film roles. He starred in the 1997 war film Welcome to Sarajevo and also in 1997 had a featured role as Sergeant Schumann in Wag the Dog. In 1998, Harrelson starred in the thriller Palmetto and played Sergeant Keck in The Thin Red Line, a war film nominated for seven Academy Awards in 1999.

Harrelson made other films such as The Hi-Lo Country and portrayed Ray Pekurny in the comedy EDtv. Also in 1999, he appeared as boxer Vince Boudreau in the Ron Shelton film Play It to the Bone.

Harrelson didn’t appear in movies again until 2003 when he co-starred as Security Guard Gary in the comedy film Anger Management. He appeared in the action film After the Sunset and the comedy She Hate Me.

In 2005, Harrelson was in The Big White and North Country. Also in 2005 he appeared as Kelly Ryan, husband of a contest-obsessed woman in the film The Prize Winner of Defiance, Ohio. Harrelson made two films in 2006, the animated film version of Free Jimmy and also A Scanner Darkly. In 2007 he played Carter Page III, gay escort of privileged Washington D.C. women, in the film The Walker.

In the Oscar-winning 2007 crime thriller No Country for Old Men, Harrelson had a small but key role as Carson Wells, a bounty hunter. The film won Best Picture and Best Director for Joel Coen and Ethan Coen. Harrelson also won a Screen Actors Guild Award for Best Cast, along with Tommy Lee Jones, Javier Bardem, Josh Brolin and Kelly Macdonald.

In 2008, Harrelson appeared in several films, among them the Will Ferrell basketball comedy Semi-Pro and the Will Smith stark drama Seven Pounds.

In 2009, Harrelson received significant praise for his performance as Captain Tony Stone in The Messenger. In what many critics considered to be his best role, Harrelson was nominated for a Satellite Award, an Independent Spirit Award, a Golden Globe Award a Screen Actors Guild Award, and an Academy Award for Best Supporting Actor. Harrelson has also won the Best Supporting Actor award in the 2009 National Board of Review award ceremonies and received accolades from various critics’ societies.

Also in 2009, he co-starred in the horror comedy Zombieland and Roland Emmerich’s 2012 as Charlie Frost, a man who warns of the end of the world.