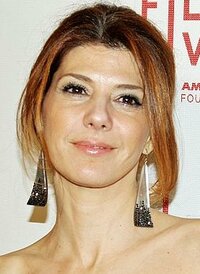 Married and Cheating
show all movies

Marisa Tomei (born December 4, 1964) is an American stage, film and television actress. Tomei first came to prominence as a supporting cast member on The Cosby Show spinoff A Different World in 1987.

Tomei followed up As the World Turns, in 1986, with a role on the sitcom A Different World. Her breakthrough comedic performance8 came in My Cousin Vinny (1992), for which she was named Best Supporting Actress at the 1993 Academy Awards, prevailing over Miranda Richardson, Joan Plowright, Vanessa Redgrave and Judy Davis. American film critic Rex Reed created controversy (and a minor Hollywood myth) when he suggested that Jack Palance had announced the wrong name after opening the envelope. While this has been repeatedly disproved – even the Academy has officially denied it – Tomei has called the story “extremely hurtful”.

After her Oscar win, she received a Screen Actor’s Guild Award nomination for Outstanding Female Supporting Actor for Nick Cassavetes’s Unhook the Stars. Next, Tomei received an American Comedy Award nomination for Funniest Supporting Actress for Tamara Jenkins’s Slums of Beverly Hills. However, she spent several years away from high-profile roles and major motion pictures before rising again to prominence. Next, she was nominated for a Satellite Award, as Best Supporting Actress for What Women Want. She would go on to receive further critical acclaim and respect for her performances in Alfie and Before the Devil Knows You’re Dead and received Academy Award nominations for In the Bedroom and The Wrestler.

Former Saturday Night Live cast member Jay Mohr wrote in his book Gasping for Airtime that, as guest host in October 1994, Tomei insisted that a proposed sketch about another actress not be used because she didn’t like the idea of making fun of her, which displeased the writers and performers, given the show’s penchant for satirizing celebrities.

In 1996, Tomei made a guest appearance on the sitcom Seinfeld, playing herself in the two-part episode “The Cadillac”. In this episode, George attempts to get a date with Tomei through a friend of Elaine. She has also made an appearance on The Simpsons as movie star Sara Sloane, who falls in love with Ned Flanders.

She received her first Golden Globe Award and her second Academy Award (Best Supporting Actress) nominations for her work in Todd Field’s In The Bedroom (2001).

Tomei received the ShoWest Award for Supporting Actress of the Year in 2002.

In 2003, Tomei appeared in the hit Anger Management with Adam Sandler and Jack Nicholson. In 2005, she was featured in an ad campaign for Hanes with the slogan “Look who we’ve got our Hanes on now”, featuring various other celebrities including Michael Jordan, Jennifer Love Hewitt, Damon Wayans, Matthew Perry and, on Spanish-language advertising, Aracely Arambula and Pablo Montero.

In 2006, Tomei had a recurring role on Rescue Me, playing Johnny Gavin’s ex-wife Angie. She won a Gracie Allen Award for Supporting Actress in a Drama Series for her work in the four episodes she appeared in.

In 2007, she appeared in the comedy Wild Hogs alongside John Travolta, Tim Allen, William H. Macy and Martin Lawrence. The film was the 13th highest-grossing movie of 2007 ($168,273,550 domestic box office). It received mostly negative reviews because of its mundane plot and poor acting. She also starred in the Sidney Lumet-directed Before the Devil Knows You’re Dead opposite co-stars Philip Seymour Hoffman and Ethan Hawke. This role received extra attention because Tomei appeared in nude love scenes with both Hoffman and Hawke. In 2008, Tomei performed nude dance routines in the independent film The Wrestler opposite Mickey Rourke. She was nominated for a BAFTA, Golden Globe and Academy Award for this performance. Numerous critics heralded this performance as a standout in her career.