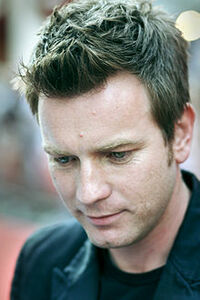 Born To Be King
show all movies

Ewan Gordon McGregor (born 31 March 1971) is a British actor who has had success in mainstream, indie and art house films. He is perhaps best known for his roles as Mark Renton in the 1996 film Trainspotting, the young Obi-Wan Kenobi in the Star Wars prequel trilogy and the romantic penniless writer Christian in the 2001 film Moulin Rouge!

McGregor made his feature film debut in 1993 in Bill Forsyth’s Being Human. The following year, he earned widespread praise and won an Empire Award for his performance in the thriller Shallow Grave, which marked his first collaboration with director Danny Boyle. His major international breakthrough soon followed with the role of heroin addict Mark Renton in Boyle’s film version of Irvine Welsh’s Trainspotting.

McGregor has been featured as the male romantic lead in Hollywood films such as Moulin Rouge! and Down With Love, and in the British film Little Voice. He received excellent reviews for his performance as an amoral drifter mixed up in murder in the British film Young Adam (2003), which co-starred Scottish actress Tilda Swinton. McGregor was one of many actors rumoured to have been offered the lead role as James Bond in the 2006 reboot Casino Royale, along with Gerard Butler, Sam Worthington, Orlando Bloom and Hugh Jackman but he turned it down because he feared becoming typecast. The role went to Daniel Craig.

McGregor is one of the few major male actors to repeatedly do full-frontal nudity in many of his films, including Trainspotting, Velvet Goldmine, The Pillow Book, and Young Adam. He also played gay and bisexual characters in Peter Greenaway’s The Pillow Book, Todd Haynes’ Velvet Goldmine, British film Scenes of a Sexual Nature, and now recently in the new film with Jim Carrey, I Love You Phillip Morris.

In 2005, McGregor lent his voice to two successful animated features; the robot Rodney Copperbottom in Robots, which also featured the voices of Halle Berry and Robin Williams; and the lead character in Gary Chapman’s Valiant, alongside Jim Broadbent, John Cleese and Ricky Gervais. Additionally in 2005, McGregor played two roles (one a clone of the other) opposite Scarlett Johansson in Michael Bay’s The Island and then appeared in Marc Forster’s Stay, a psychological thriller co-starring Naomi Watts and Ryan Gosling.

McGregor has narrated the STV show JetSet, a Scottish series following the lives of student pilots and navigators at RAF Lossiemouth as they undergo a gruelling six-month course learning to fly the Tornado GR4 — the RAF’s primary attack aircraft.

McGregor appears opposite Colin Farrell in the Woody Allen film Cassandra’s Dream, and will co-star with Daniel Craig in Dan Harris’ upcoming film adaptation of Glen Duncan’s novel I, Lucifer. He also appeared in 2003’s Big Fish and alongside Jim Carrey in 2009’s I Love You Phillip Morris. McGregor appeared opposite Renée Zellweger in the film Miss Potter (2006) as Norman