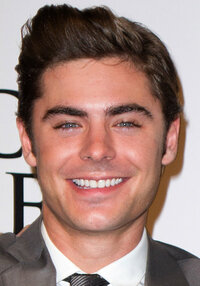 Zachary David Alexander "Zac" Efron (born October 18, 1987) is an American actor, singer, and dancer. He began acting professionally in the early 2000s, and became known to young audiences after his roles in the Disney Channel Original Movie High School Musical, the WB series Summerland, and the 2007 film version of the Broadway musical Hairspray.

In 2006, Efron starred in the Disney Channel original movie High School Musical as Troy Bolton, the popular student and captain of the basketball team. The film, which he initially made with “low expectations”,1 helped Efron gain recognition among teenage audiences as both an actor and a singer, even though his singing voice was overdubbed. As a result, he placed as high as #4 on the IMDBPro's STARMeter for the week of January 29, 2006. In August 2006, Efron won a Teen Choice Award in the Breakout Star and the TV — Choice Chemistry categories, shared with Vanessa Hudgens. The film's cast, along with Efron, toured Sydney, Australia, London, England, and other locations to promote the film.

Shortly after High School Musical aired, Efron debuted with two simultaneous charted songs on Billboard Hot 100 on February 4, 2006, with “Get'cha Head in the Game” and “Breaking Free”, a duet with Vanessa Hudgens from the film. On the following week's chart, Efron had five simultaneous song credits from High School Musical: “Get'cha Head in the Game”, “Start of Something New”, “What I've Been Looking For: Reprise”, “We're All in This Together” and “Breaking Free.” “We're All in This Together” was credited to the whole High School Musical cast. “Breaking Free”, at the time, made the fastest climb in the history of the Billboard charts, from #86 to #4 between the two weeks; the record was beaten by Beyoncé and Shakira's “Beautiful Liar”. Efron also appeared in the 2006 Disney Channel Games as captain of the Red Team.