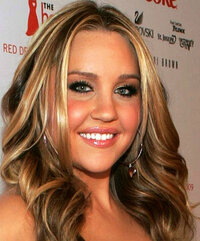 Amanda Laura Bynes (born April 3, 1986) is an American actress, fashion designer and singer. Bynes appeared in several successful television series, such as All That and The Amanda Show, on Nickelodeon in the mid to late 1990s and early 2000s, and in 2002, she starred in the TV series, What I Like About You.

In 1993, Bynes attended a comedy camp, with guest-instructors including Arsenio Hall and Richard Pryor, and began professionally acting at the age of seven, appearing in a television advertisement for Buncha Crunch candies. During her childhood, she also appeared on stage in versions of Annie, The Secret Garden, The Music Man and The Sound of Music. After taking acting classes, Bynes became a regular cast member of Nickelodeon's Figure It Out and All That (both in 1996). Bynes remained a regular cast member on All That until its presumed cancellation in 2000, though she appeared in the sketches since shooting and preparing as the star of her own sketch show The Amanda Show, also on Nickelodeon. The Amanda Show features a combination of comical skits and sketches, including Amanda Bynes playing Judge Trudy, a judge based on Judge Judy that always rules in kids' favor, and Penelope Taynt, an Amanda-obsessed fan.

Bynes made her film debut in 2002's modest box office success, Big Fat Liar, where she starred opposite Frankie Muniz. Her first solo leading role was in 2003's What a Girl Wants as Daphne Reynolds, co-starring with Colin Firth, Oliver James, and Kelly Preston. Subsequently, Bynes starred in The WB Television Network's sitcom What I Like About You and had voice parts in 2003's Charlotte's Web 2: Wilbur's Great Adventure and 2005's CGI animated comedy, Robots. She also co-starred in an episode of The Nightmare Room as Danielle Warner, and in Arliss as Crystal Dupree. Bynes appeared on the cover of Vanity Fair's July 2003 edition with nine of Hollywood's other female young stars, including Lindsay Lohan, Hilary Duff, Alexis Bledel, Raven-Symoné, Evan Rachel Wood, the Olsen Twins, and Mandy Moore. Although she is often compared with them, Bynes has said that “It's like being the hot girl at the high school party. I was never that girl. I grew up with terrible acne and feeling insecure. I was tall and skinny. I didn't feel pretty at all, and guys didn't even like me. That's why I got into comedy.” Bynes has also said that her relatability to teenage audiences may stem from the fact that she is “more similar to them than some… socialite or whatever.”

In 2006, Bynes starred in She's the Man, a comedy based on William Shakespeare's Twelfth Night. In the film, Bynes disguises herself as her brother in order to join the boys' soccer team due to the fall of the girls' team. Producers had originally wanted to cast singer Jesse McCartney as Bynes' brother, noting a physical resemblance between McCartney and Bynes disguised as a boy, but McCartney was unavailable. James Kirk plays her brother in the film. Around the time of the film's release, Bynes commented that she would like to start appearing in more mature roles, and believes that she is still developing her acting skills and maturing as an actress, saying that she is “getting better” with each role.16 Bynes appeared in another romantic comedy, Lovewrecked, which was shot before She's the Man but released after it, showing in cinemas outside of the United States in 2005 and 2006 and debuting in the U.S. on the ABC Family network on January 21, 2007. She also portrays Penny Pingleton in Hairspray, a film adaptation of the Broadway musical of the same name. The movie, which was her first musical role, began filming in Toronto in September 2006 and was released on July 20, 2007. Bynes has stated that she enjoyed appearing in a “fun, quirky part in a big ensemble movie.” Bynes next starred in another comedy, Sydney White, released on September 21, 2007. The film is based on Snow White and the Seven Dwarfs, with Bynes playing a freshman in the college Greek system, co-starring alongside Sara Paxton and Matt Long.

In 2008, Bynes appeared in the Lifetime Television movie Living Proof as the student assistant of Harry Connick, Jr.'s character, who creates the Herceptin drug for breast cancer. In April 2009, Bynes filmed a pilot for an ABC sitcom titled Canned, but the series failed to make the network's fall lineup. Bynes was also originally set to appear as the female lead in the 2009 comedy Post Grad, and was replaced by Alexis Bledel.

In June 2009, Bynes inked a two picture deal with Screen Gems. The first of the two movies was the 2010 teen comedy Easy A, starring Emma Stone and Lisa Kudrow, and the second was to have been a starring role. Bynes also planned to reprise her role as Penny Pingleton in the big screen sequel to Hairspray. However, Hairspray 2 was canceled.

In June, 2010, Bynes stated that she planned to retire from acting, announcing on her Twitter page, “I don’t love acting anymore, so I’ve stopped doing it.” A month later, Bynes had a seeming change of heart and “unretired.”