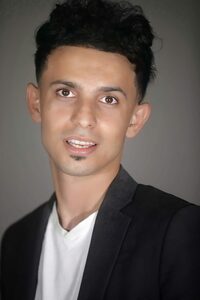 Fuad Al-Qrize (Arabic:فؤاد الكريزي, Born: January 1, 1990) is a Yemeni musician, Producer, Author And Writer, The chief executive officer (CEO) of Amas Productions since October 2018 and has been its chief operating officer (Yemeni Artists Syndicate in Ibb, Yemen) since 2009.

Yemeni musician, screenwriter, and producer Fuad Al-Qrize announced completing the final artistic touches of the historical film “Yemen, the Gate of Glory”. The film reviews important historical periods of Yemeni history with a contemporary artistic formulation that highlights the beauty of the ancient Yemeni cultural heritage, which is full of authentic customs and traditions that Yemenis were raised on throughout the ages.

Yemeni musician, screenwriter, and producer, “Fuad Al-Qrize,” said in a statement that the film was produced by the Amas Foundation for Television and Art Production and Distribution, and was scheduled to be published during last Ramadan season, but the circumstances relating to the Covid-19 epidemic led to the delay of some production operations.

The production company decided to publish the film in the summer season of 2021 and indicated that the film monitors the values, morals, and customs that still exist these days in Yemen and impact on Yemeni society.

Al-Qrize commented, “The events were filmed in the historical areas, but he did not specifically mention the areas to entice the audience that is waiting for the film. He stressed that the work was formulated in an interesting way that would make watching it fun.

Fuad also thanked the production company, which he said is a company that deserves respect and appreciation for its huge productions that help document the ancient Yemeni culture and that he is always happy to work with, and he mentions that it is not the first cooperation between him and Amas Foundation, as several previous works were produced for him. Including “Sada AlMadhi” and “Yemeni strings”.

Fuad Al-Qrize is known as one of the most important producers and screenwriters in Yemen, as he has participated in several Yemeni TV shows, films and series that won Arab and international awards, including: