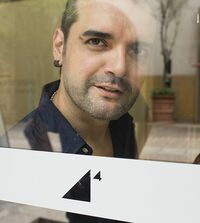 Roberto F. Canuto is a filmmaker from Gijon (Asturias), Spain, with working experiences in Los Angeles (USA) and China, where he co-found Almost Red Production China. He is one of the first european directors that collaborates with a Chinese filmmaker producing films in China. He directed various short films and a feature film, screened in Film Festivals around the world and received awards, including best film. Roberto has a Master in Fine Arts degree (MFA) in Filmmaking, obtained at the New York Film Academy (Universal Studios, Hollywood), where he directs different projects, including the award winning films “Toto Forever” (screened in over 30 international film festival) and the graduation feature film “Desire Street”, co-directed with Xu Xiaoxi, his usual collaborator (Best feature film in Asturian Film Festival 2014 and Special Mention Best Film in Mix Mexico International Film Festival). Previously he obtains his BA in Audiovisual Communication at Madrid’s Complutense University (Spain). During his study years he collaborates as a film critic in different media and he gets influenced by many classic directors after frequent sessions at the Spanish Cinematheque.

His project, “Ni Jing: Thou Shalt Not Steal” (awarded Best Short Film in Riverside Saginaw Int. Film Festival and Best Actress and Runner Up Best Short in Asturian Film festival 2014), was produced in China in 2013, where he lives working in fiction and commercials works at his company Almost Red Productions, that aims to coproduce films between Asia, Europe and America. In 2015 directed “Floating Melon”, that it was screened in over 40 international film festivals, with some awards, and in 2016 his first movie filmed in Spain and in Asturian language, “Advent (Ad-vientu)”, that was released at the 54th Gijón International Film Festival with and obtains an Audience Choice award. His latest project, “Sunken Plum”, in in post-production, to be completed in 2017.