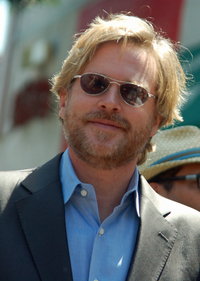 Elwes made his acting debut in Marek Kanievska’s film Another Country (where he played James Harcourt, a young and sentimental homosexual student from an English boarding school), with Rupert Everett and Colin Firth. The film, adapted from a play, was loosely based on the formative years of British spy Guy Burgess, one of the Cambridge Five.[citation needed] He went on to play Guilford Dudley in the British film Lady Jane, costarring Helena Bonham Carter. His performance in that film led director Rob Reiner to cast Elwes in another leading role, this time as the stable boy turned swashbuckler Westley in the comedy The Princess Bride.

Elwes attending the Saw 3D premiere on October 27, 2010.He continued working steadily, varying between dramatic roles, as in The Bride (1985) with Sting and Jennifer Beals, to the Academy Award-winning Glory (1989), and comedic roles, as in Hot Shots! (1991). In 1993, he starred as Robin Hood in Mel Brooks’ comedy, Robin Hood: Men in Tights Elwes also appeared in such films as Francis Coppola’s adaptation of Bram Stoker’s Dracula, The Crush, Rudyard Kipling’s The Jungle Book, Twister, Liar Liar, Cradle Will Rock, The Cat’s Meow and Kiss the Girls. In 2004, he starred in the horror/thriller Saw which, at a budget of a little over $1 million, grossed over $100 million worldwide.[citation needed] The same year he appeared in Ella Enchanted, portraying the villain rather than the hero. He made an uncredited appearance as Sam Green, the man who introduced Andy Warhol to Edie Sedgwick, in the 2006 film Factory Girl. In 2007, he appeared in Garry Marshall’s Georgia Rule with Jane Fonda. In 2009 Elwes worked on two performance capture films, Robert Zemeckis’ A Christmas Carol and The Adventures of Tintin: Secret of the Unicorn directed by Steven Spielberg. He also starred in the mystery thriller Shadows, directed by John Penney. Elwes portrayed Dr. Clement in the psychological thriller Psych 9, which was directed by Andrew Shortell. Elwes returned to the Saw franchise in Saw 3D, the seventh film in the series, as Dr. Lawrence Gordon. In January 2010 it was announced that Elwes had been chosen to portray George Harrison in Robert Zemeckis’ 3-D performance capture re-telling of Yellow Submarine.