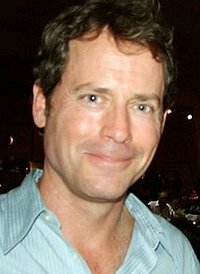 Gregory "Greg" Kinnear (born June 17, 1963) is an American actor and television personality, who first rose to stardom as the first host of E!'s Talk Soup. He has appeared in over 20 motion pictures. Kinnear was nominated for an Academy Award for his role in As Good as It Gets.

It was in 1994 that Kinnear had his first big screen role, as a talk show host yet again in the Damon Wayans comedy Blankman. In 1995 he won the part of David Larrabee in Sydney Pollack's remake of Billy Wilder's 1954 classic Sabrina. He later played the lead role in the 1996 comedy Dear God. In 1997, he was cast in James L. Brooks' comedy-drama, As Good as It Gets, for which he received a nomination for the Academy Award for Best Supporting Actor. His next film, A Smile Like Yours, had him starring opposite Lauren Holly as part of a couple trying to have a baby. His next film was the popular You've Got Mail, in which he played Meg Ryan's significant other. His following films were Mystery Men, Nurse Betty, Loser, The Gift, and Someone Like You.

In 2002, Kinnear starred in the movie Auto Focus about the life and murder of actor Bob Crane. In 2003 he starred in Stuck On You, a comedy in which he played opposite Matt Damon as a conjoined twin who pursues his dream of becoming a Hollywood actor inspite of his joined brother's desire for a different kind of life. In 2005 he starred in the black comedy The Matador opposite Pierce Brosnan.

In 2006, Kinnear co-starred with Steve Carell in the Oscar-winning comedy-drama Little Miss Sunshine, and with Mark Wahlberg in Invincible, based on the true story of a bartender who tries out for the Philadelphia Eagles football team. He also appeared in Fast Food Nation, playing a fast food executive who discovers secrets about his company. In 2008 starred in the movie Flash of Genius, a docudrama about Robert Kearns who invented the intermittent windshield wiper.

His portrayal of then-Major Bruce P. Crandall in 2002's We Were Soldiers brought public attention to Crandall's heroism during the 1965 Battle of Ia Drang. (On February 26, 2007, Crandall was awarded the Medal of Honor by President Bush.)

Greg also appeared in the movie “Baby Mama” alongside Tina Fey and Amy Poehler. He played a man working in a local smoothie shop and sparked a romantic interest in Tina Fey's character. In 2010, Kinnear starred as the estranged father of Miley Cyrus' character in The Last Song.