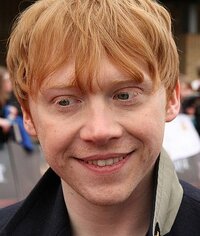 Rupert Alexander Lloyd Grint[1] (born 24 August 1988) is an English actor best known for portraying Ron Weasley in the Harry Potter films. In December 2007, Grint was ranked #16 in the list of Forbes top twenty earners under 25 with an annual earning of $4 million (US).

Grint also starred in Driving Lessons, which was released in the summer of 2006. Grint got excellent reviews for his first leading role: the critics praised the realism he brought into the role of shy teenager Ben Marshall, as well as his “riotous comedic timing” and “fantastic screen chemistry” with Walters.

Also known for his radio and television voice-over work, he appeared as Nigel Molesworth in the Baggy Trousers series for BBC Radio 4 and voiced Peter Pan in a BBC documentary.

On 9 July 2007, Grint and fellow cast-mates Daniel Radcliffe and Emma Watson left imprints of their hands, feet and wands in front of Grauman's Chinese Theater in Hollywood.

On 2 July 2008, it was announced that Grint would star in gritty thriller Cherrybomb alongside Robert Sheehan and Kimberley Nixon. Filming was wrapped up in late August 2008; the film opened in the UK on 23 Apr 2010.

In August 2008, it was announced that Grint is to star in comedy remake of 1993 French film Cible Emouvante, titled Wild Target, alongside Bill Nighy and Emily Blunt. Grint's character is called Tony. The filming for Wild Target wrapped up on 27 September 2008 and the film opened in the UK on 18 June 2010.

While directing Prisoner of Azkaban, director Alfonso Cuarón said Grint is “the likely future star out of the Hogwarts trio”.

Rupert Grint was also praised by critics for his performance in Harry Potter and the Half-Blood Prince. Michael McGuire, a writer for the Examiner, had this to say about him:

I appreciated Rupert Grint for the first time. To me, he’s always been “that other guy” in the Potter movies, but he truly steps forward in this edition and, if he keeps it up, he could be the one of the three getting the best parts a decade from now.

Rupert Grint appeared as the Star in a Reasonably Priced Car in Episode Three of Series Fifteen of Top Gear, setting a lap new record in the Kia Cee'd, although the record was broken two weeks later by both Cameron Diaz and Tom Cruise.

On 6 January 2011, Grint made a guest appearance in Come Fly with Me.