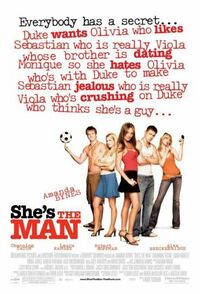 When her brother decides to ditch for a couple weeks in London, Viola heads over to his elite boarding school, disguises herself as him, and proceeds to fall for one of her soccer teammates. Little does she realize she's not the only one with romantic troubles, as she, as he, gets in the middle of a series of intermingled love affairs.

Viola Hastings (Amanda Bynes) is a high school soccer player who learns that the girls team at her school, Cornwall, is being cut. After her request to join the boys' team is refused, she finds a way to play for Cornwall's rival, Illyria. Viola's twin brother, Sebastian (James Kirk), is supposed to enter Illyria as a new student. However, he plans to visit London secretly to enter a contest with his rock band. Sebastian asks Viola to cover for him by telling the school that he is sick and each of their parents (who are divorced) that he is staying with the other.

Viola instead decides to pass herself off as Sebastian and join the boys' soccer team at Illyria. She hopes to beat the Cornwall team and humiliate her cocky and sexist goalie ex-boyfriend, Justin (Robert Hoffman). With the help of her friends, Viola becomes the quirky “Sebastian”.

At Illyria, Viola's roommate is Duke Orsino (Channing Tatum), a good-looking striker on the soccer team. Viola's soccer skills are still not good enough to make first string. After spending so much time with him, Viola realizes that she has fallen in love with Duke. However, Duke is currently interested in Viola's lab partner, Olivia (Laura Ramsey). In exchange for Viola's help in getting Olivia's attention, Duke agrees to put in extra soccer practice time with her. The practice pays off when Coach Dinklage (Vinnie Jones) promotes Viola to first string. Olivia develops a crush on “Sebastian”. Since “Sebastian” isn't interested in her, Olivia plans to go out with Duke in order to make him jealous.

The plot becomes complicated when the real Sebastian returns from London a day early. When he arrives at Illyria, Olivia runs up and kisses him. Duke sees this and thinks his roommate has betrayed him. They argue and Duke kicks Viola out of their room. Viola ends up sleeping at her friend's house and oversleeps, causing the real Sebastian to wind up on the field playing in what should be his sister's spot the following day – the day of the big game! During the game, someone reveals the truth about Viola to Principal Gold (David Cross), and he stops the game, determined on revealing the truth, but Sebastian proves that he really is a boy by pulling down his shorts and exposing his genitals (off-screen). At half-time, Viola explains the situation to Sebastian and they switch places again.

Viola tries to explain that she really is a girl, finally convincing Duke and everyone else by showing them her breasts (again, off screen). The coach agrees to let Viola keep playing anyway, sternly informing the Cornwall coach that Illyria doesn't discriminate based on gender. Illyria wins the game on a penalty kick when Viola scores a goal (after a save and then pass from Duke) past her ex-boyfriend Justin.

Everyone at Illyria rejoices after the victory, except for Duke who is hurt at Viola's deception. She invites Duke to her debutante ball. They meet in a garden and head to the Debutante ball, where they are introduced, come on stage, and kiss, earning wolf whistles. At the end of the film, Viola and Duke are shown playing on the soccer team of Illyria, both on the first string. This leads the audience to believe that Duke and Viola are going to be together in the end.