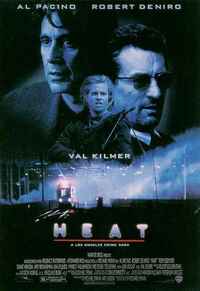 Heat is a thriller from 1995 about a professional burglar named Neil McCauley and his brilliant portrait of a criminal mastermind. He calculates risk and reward like a criminal mastermind. Yet his character is a brutal one and risks everything for revenge--which is his downfall. This is the first and only time Al Pacino and Robert DeNiro appear as arch enemies who seek to outwit the other.