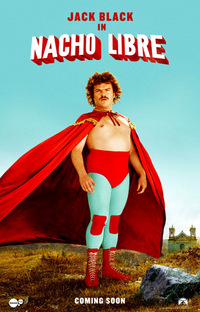 Nacho Libre is loosely based on the story of Fray Tormenta ("Friar Storm"), aka Rev. Sergio Gutierrez Benitez, a real-life Mexican Catholic priest who had a 23-year career as a masked luchador. He competed in order to support the orphanage he directed. The producers are Jack Black, David Klawans, Julia Pistor, and Mike White.

Ignacio (Jack Black) is the son of a Lutheran missionary from Scandinavia and a deacon from Mexico. They tried to convert each other but instead got married, then died while Ignacio was young. Having grown up as an orphan in a Mexican monastery, he is now a grown man and the monastery’s cook, but he is looked down upon by the other friars. All his life, Ignacio has dreamed of becoming a luchador (lucha libre performer); but because wrestling was forbidden by the monastery, his dream remains unfulfilled. Ignacio cares deeply for the orphans, but his food is terrible due to a lack of funds with which to obtain quality ingredients.

After being robbed in an alley of the orphans' tortilla chips, he decides that he must hatch a plan to make money to buy better food. During the same few days, he reveals that he additionally desires to be respected and admired, as the luchadores are; that he is particularly hostile to one friar, who behaves in a sanctimonious way toward him; and that he harbors loving feelings for the newly arrived tutor, Sister Encarnación (Ana de la Reguera) with whom he finds he has much in common. It is partly to impress Sister Encarnación with the idea that he is a good man that Ignacio calculates his later actions.

Ignacio eventually decides to become a luchador. He pairs up with the tortilla chip thief to earn money for the orphans. Donning a homemade mask, sweats, and a blouse, he enters the local competition, accompanied by the slender, atheistic street thief Steven (Héctor Jiménez). Steven, under the name of Esqueleto (“Skeleton”), becomes Ignacio's tag partner in wrestling. Ignacio, in order to keep his identity secret from the monastic order, shortens his given name to “Nacho” while in the ring.

In their first match, Nacho and Esqueleto are defeated. To their surprise, the manager pays them anyway, explaining that every wrestler is entitled to a portion of the total revenue. He asks them to return next week to fight another bout. Later, Ignacio is caught wearing his wrestling undergarments by Chancho, one of the orphans. Nacho tells Chancho that when you get older it is fun to play dress up, but Chancho sees through the lie but promises not to tell anyone that he has become a Luchador.

Ignacio becomes frustrated by losing every fight and looks for help. Steven brings him to a gypsy-like man (Peter Stormare) who tells Ignacio to climb to an eagle's nest, crack open the egg, and swallow the yolk. This, he claims, will give him the powers of an eagle. Ignacio completes the task, but still loses the following night's wrestling bout. Later, he decides to seek advice from Ramses (played by Mexican Luchador César González who works as “Silver King”), the champion luchador. They sneak into a party and try to arrange an audience with the champion to try to become experts. They fail and are thrown out. Nacho is rather disgusted by Ramses' treatment of them, which kills his hero-worship of the champion.

Thereafter both Esqueleto and Nacho compete with several other popular wrestlers in order to earn the right to challenge Ramses. The wrestler Silencio (“silence”) wins; Nacho comes in second place.

Ignacio is revealed to the monastery as a luchador, when his robe catches fire during a prayer, exposing his wrestling costume. Ignacio leaves the monastery to live in the nearby wilderness, taking only his clothes and a lucky machete given to him by Chancho.

In the wilderness, Ignacio eats cactus and builds a crude framework of sticks, in an effort to create shelter. In the morning, Steven comes to see him. He tells him that Silencio's bunions are swollen and therefore cannot fight Ramses; because Nacho came in second, he now has the right to fight Ramses in Silencio's stead. During Steven's explanation, the viewer is shown a flashback, wherein Steven ran a motorized tricycle over Silencio's foot, having seen him quarrel with a tiny child over a loaf of bread.

Ignacio, at first, is skeptical of Steven's enthusiasm, due to an argument in which Steven had stated that he hated all the orphans in the whole world. Steven replies that he does not hate them anymore, and that the children need a hero. Ignacio accepts the role.

That night, Ignacio sends a message via Steven to Sister Encarnación, explaining his plan and confessing his love to her. In the match, Nacho is nearly defeated – indeed, unmasked – by Ramses. Although the unmasking is a very significant move for a Luchador's career, suggesting the player's defeat and dishonor, the match continues with minimal acknowledgment of the act. Just as Nacho is about to lose, Sister Encarnación enters accompanied by the orphans, who are wearing masks to imitate Nacho. Inspired, Nacho throws Ramses off, chases him out of the ring, and jumps onto him with a flair recalling his earlier brush with eagle eggs and their supposed power. By doing so, Nacho beats Ramses and becomes champion.

Ignacio uses the prize money to buy a bus for field trips for the children. The film closes on one such trip, wherein Ignacio, Steven, and Sister Encarnación take the children to see an ancient city, Monte Albán, built by the Zapotec civilization. Ignacio, by now, has earned Encarnación's favor, as demonstrated by her signs of encouragement and his somewhat awkward acknowledgment thereof.