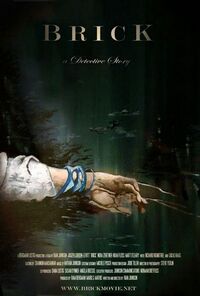 A teenage loner pushes his way into the underworld of a high school crime ring to investigate the disappearance of his ex-girlfriend.

Bespectacled high school nerd Brendan Frye sits contemplating the sprawled body of his ex-girlfriend Emily. Two days before, Emily had contacted him for help by leaving a note in his locker. On the phone she says everything is fine but then screams and vanishes. As a genius and an outsider in the teenage world tough-talking Brendan prefers to avoid the high school elite but breaks his isolation in order to find the girl he still loves. He teams up with computer geek the Brain to investigate the social world of the school and uncovers a slimy mess of secrets. Help comes from cheerleader Kara, as Brendan dallies with femme fatale Laura and walks a tightrope doing part-time investigative work for Assistant Principal Trueman. The clues reveal that Emily was hanging out with the cool kids and got herself into something bad. Everything leads to the Pin, the leader of the juvenile underworld whose Mom bakes great cookies but who also has a big problem. He’s missing a brick of heroin and his gang of young criminals is falling apart.