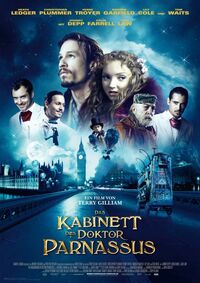 The Imaginarium of Doctor Parnassus

The Imaginarium of Doctor Parnassus is a 2009 fantasy film directed by Terry Gilliam and written by Gilliam and Charles McKeown. The film follows a traveling theater troupe whose leader, having made a bet with the Devil, takes audience members through a magical mirror to explore their imaginations and present them with a choice between selfulfilling enlightenment or gratifying ignorance.

Powered by JustWatch
Watch "The Imaginarium of Doctor Parnassus":
Stream

Doctor Parnassus' (Christopher Plummer) theatre troupe, which includes sleight of hand expert Anton (Andrew Garfield), confidant Percy (Verne Troyer), and Parnassus' daughter Valentina (Lily Cole), performs outside a pub in London. A drunkard barges onstage, crashing through a stage mirror, and is thrown into a journey of the imagination that culminates in his being offered a choice between finding enlightenment and going to a pub. After he enters the pub, it explodes. Parnassus says he has lost another one to Mr. Nick (Tom Waits).

Mr. Nick reminds Parnassus that in three days Valentina will turn 16, at which point her soul will be his. As the troupe crosses a bridge, Anton spies someone hanging beneath it. They rescue the hanging man (Heath Ledger), who spits out a golden pipe when revived.note 19 Claiming to have amnesia, the man joins the troupe as a barker. Parnassus becomes despondent over the impending loss of his daughter. Mr. Nick visits Parnassus, revealing that the hanging man is a disgraced philanthropist named Tony. He offers Parnassus a wager: Valentina can stay with whomever wins five souls first.

Tony convinces the troupe to make the show more attractive to contemporary Londoners. In an upscale mall, Tony lures a woman into the mirror, where he takes on a different appearance (Johnny Depp). The landscape, powered by the woman's imagination, features gigantic shoes and jewels. Tony dances with her, and they spy a motel run by Mr. Nick. Tony convinces the woman to take a gondola toward a pyramid alone, winning a soul for Parnassus. The woman emerges from the Imaginarium, writes a blank check to Parnassus and gives her purse to the troupe. Other women watching the show clamor for a turn; Parnassus wins three more souls.

Four Russian gangsters see Tony, who owes them money, and he flees into the Imaginarium. As the gangsters threaten Tony, who has once again taken on a different appearance (Jude Law), Parnassus tempts them with a police recruitment song, promising they will enjoy being cops because they can legally brutalize people. Mr. Nick successfully tempts them with a giant babushka; the score is four souls apiece.

Parnassus reveals to Valentina that in an hour she will belong to Mr. Nick. He explains that, hundreds of years earlier, he ran a monastery where monks perpetually recited a story to sustain the world. Mr. Nick challenged their beliefs by sealing their mouths. The world continued existing, but Parnassus claimed it was because stories were being told elsewhere. Mr. Nick made a bet with Parnassus over which of them could win over the souls of people to either crave stories and imagination (Parnassus) or addictions and feeble desires (Mr. Nick). Parnassus won over 12 souls before Mr. Nick, and was given immortality. Because his body still aged, Parnassus made a new pact with Mr. Nick so that he might be youthful again in order to win the heart of a woman he loved. In exchange, any child he fathered would become Mr. Nick's property when the child turned 16.

Valentina wants to run away, but Tony enters the Imaginarium to give his soul to Parnassus. Anton has discovered that Tony is a fraudulent charity scammer and jealously struggles with Tony. In the scuffle, all three of them end up in the mirror.

In the Imaginarium, Tony (Colin Farrell) and Valentina float down a river in a boat. Shortly after an impoverished child disrupts their harmony in the boat, Tony is suddenly back in his role as a philanthropist, speaking at a fundraiser with the President (Peter Stormare) attending. Anton appears as a child and exposes Tony as a fraud. A mob pursues Tony as the landscape disintegrates around them. Anton falls into a void, and Tony flees into a desert. Valentina enters a shifting landscape of broken glass and mirrors. Distraught over her father's bargain, Valentina decides to give her soul to Mr. Nick. Chased by the mob, Tony flees up Mount Parnassus as a heartbroken Parnassus looks on. Mr. Nick offers to trade Valentina for Tony.

Tony spots a gallows, but Parnassus confronts him, holding two copies of Tony's pipe, which he had used to brace his windpipe against the noose. Parnassus challenges Tony to choose which pipe is genuine and which will break. Tony chooses the wrong pipe and dies. Valentina is freed.

Parnassus emerges from the Imaginarium a few years later, finding that Valentina married Anton and has a daughter. He watches the family from behind a restaurant window, but does not rejoin them. Teaming up with Percy once more, Parnassus begins selling toy theater replicas of the imaginarium on a street corner. Mr. Nick, still present, invites Parnassus over to him, but Percy successfully puts an end to the temptation.