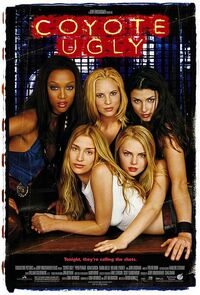 Coyote Ugly is a 2000 romantic comedy/drama based on the actual Coyote Ugly Saloon, set in New York City. The film stars Piper Perabo and Adam Garcia. It was directed by David McNally, produced by Jerry Bruckheimer and Chad Oman and written by Gina Wendkos.

Violet Sanford (Piper Perabo) leaves her hometown of South Amboy, New Jersey, her father Bill (John Goodman), and best friend Gloria (Melanie Lynskey) to pursue her dreams in nearby New York City. When leaving town to become a songwriter, she signs an autograph which is pinned on the wall of the pizza place where she worked. The wall has many other autographs signed by the rest of the employees in South Amboy that left town hoping to make it big.

Violet tries unsuccessfully, dozens of times, to get her demo tape noticed by the recording studios. With only a few dollars left in her pocket after her apartment is robbed, she goes to an all-night diner and notices some girls flaunting the hundreds of dollars in tips they earned. After inquiring, she finds out that they work at a trendy bar named Coyote Ugly. She finds her way to the bar and convinces the bar owner Lil (Maria Bello) to hire her. Lil hires her and explains she did so because Violet looks like a kindergarten teacher who the childish bar patrons will come to see. She is reluctantly nicknamed “Jersey”. After starting her job, she quickly discovers she must learn the ropes of singing, dancing, and performing wild acts before a rowdy crowd.

One night, she tries to get herself noticed by a music industry scout. The bartender jokingly points out Kevin O’Donnell (Adam Garcia), making her believe that he is the bar owner. When the joke is discovered, Violet feels that Kevin was making a fool out of her. This event eventually brings them closer together. Kevin tries to help her in overcoming her shyness on the stage and they finally become lovers, in spite of his attempt to hide his past and departure from Australia. One night when she’s doing a rowdy move while having water poured on her, Violet’s dad Bill decides to pay her a visit at work and gets angry at her. Then Bill gets in a massive car accident.

She finally lands a deal with a record label after a successful performance at an open mic night at the Bowery Ballroom which was attended by all of the ‘Coyotes’ from the Coyote Ugly saloon.

Back at Coyote Ugly after she sings with LeAnn Rimes the song she wrote for her while Bill watches with pride Violet successfully auctions him off for a date.