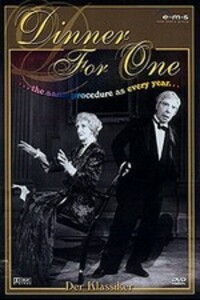 Der 90. Geburtstag oder Dinner for One

Dinner for One, also known as The 90th Birthday, or by its corresponding German title, Der 90. Geburtstag, is a comedy sketch written by British author Lauri Wylie for the theatre in the 1920s. German television station Norddeutscher Rundfunk (NDR) recorded a performance of the piece in 1963, in its original English language.

The sketch presents the 90th birthday of elderly upper-class Englishwoman Miss Sophie, who hosts a dinner every year for her close friends Mr Pommeroy, Mr Winterbottom, Sir Toby, and Admiral von Schneider to celebrate the occasion. (Note that the plot has nothing to do with New Year's Eve, as is often incorrectly stated. There is a “Happy new year” toast, but this is purely a reference to Miss Sophie's anniversary.) The problem is that given Miss Sophie's considerable age, she has outlived all of her friends, and so her equally aged manservant James makes his way around the table, impersonating each of the guests in turn. Miss Sophie decides on appropriate drinks to accompany the menu of the evening, consisting of Mulligatawny soup (Miss Sophie orders sherry), North Sea haddock (with white wine), chicken (with champagne), and fruit for dessert (with port) served by James, and so he finds himself raising (and emptying) his glass four times per course. That takes its toll, increasingly noticeable in James' growing difficulty in pouring the drinks, telling wine glasses from vases of flowers, and refraining from bursting into song. Even before the alcohol begins to exert its influence, he has trouble avoiding the head of a tiger skin laying on the floor between the dinner table and the buffet.

The crucial exchange during every course is:

After the dinner, Miss Sophie indicates to a very drunk James that she wishes to retire to bed, to which James responds: