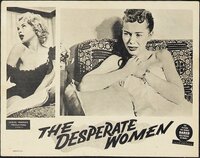 The film is a cheesy but sincere plea for proper sex education--and against illegal abortion.

My mom played Miss Parker in this film. The scene of the botched illegal abortion was filmed at the Sea Breeze Motel at Rockaway Beach in Pacifica, California. Because this film was considered a bit risque, some of the actors did not give their real names in the credits, but made up false stage names, borrowing from each other's names. For example, my mom took the name “Virginia Leon” from one of the others in the cast, Prof. Leon Forbes at San Francisco State working at the Actors Workshop. Forbes, in turn, playing the newspaper publisher, took the name “Robbie Lee”, using my mom's stage name, Elizabeth Lee. She got connected to the film through Jules Irving and Herb Blau at SF State. I have tried for years to find a print of this movie, and finally found one &mdash; in Germany. Movie Hunters (www.moviehunter.tv) has gotten several requests for the film, because there is something of a cult following for the cinamatographer, Russ Meyer, but they have never located a print. There was a 1958 German release in both Germany and Austria under the name, “Verzweifelte Frauen”, and a 35mm print does survive in the Filmverleih – Deutsche Kinemathek (Potsdamer Straße 2, 10785 Berlin, Tel: +49 30 300 903 31 filmverleih@deutsche-kinemathek.de). It is unknown whether this print is dubbed or has subtitles.

Here is <A HREF=”http://movies.nytimes.com/movie/89252/The-Desperate-Women/overview” TARGET=”Link”>one published review</A>: <P> <I>Louis B. Appleton Jr. was the director of the low-low-budget Desperate Women, while Anne Appleton was the star. Hmm. . .a subtle pattern begins to emerge. Originally ballyhooed as “adults only” and shown only to segregated-by-sex audiences, the film is a cheesy but sincere plea for proper sex education—and against illegal abortion. The impressionable heroine is foolishly led to believe that birth-control devices are a certain protection against unwanted pregnancy; the film argues that the word “No” is the most effective contraceptive of all. Upon finding herself with child, the poor girl attempts to abort the baby, with tragic results (it goes without saying that the film was made several years before Roe vs. Wade). The director of photography on Desperate Women was Russ Meyer, who'd later go on to a spectacular career as producer-director of nudie exploitation films. ~ Hal Erickson, All Movie Guide</I>