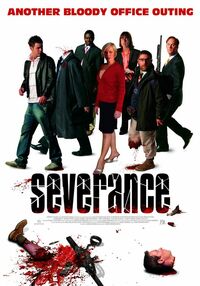 When weapons multi-national Palisade Defense reward their European sales division with a team-building weekend in the mountains of Eastern Europe, the team fight first amongst themselves, and later for survival against a group of war-crazed killers intent on revenge!

Following a boom in military arms sales, the team at Palisade Defence are rewarded with a team-building weekend in the wilds of Eastern Europe. But what begins as a corporate jolly rapidly descends into a terrifying fight for survival against a forgotten army of bloodthirsty maniacs armed with machetes, flamethrowers, machine guns and a thirst for revenge.

If the team can survive the bear traps and treacherous pits long enough to show their guts rather than losing them, they may just learn that getting slaughtered with workmates isn’t always a good idea.