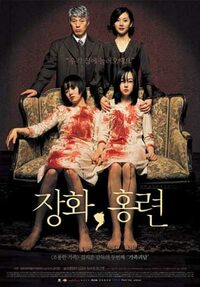 A Tale of Two Sisters

A Tale of Two Sisters (장화, 홍련 Janghwa, Hongryeon literally 'Rose Flower, Red Lotus') is a 2003 South Korean psychological horror film. It was directed by Kim Ji-Woon and is both the highest-grossing Korean horror film and the first to be screened in American theatres.

Powered by JustWatch
Watch "A Tale of Two Sisters":
Stream

The film opens in a psychiatric hospital, where a doctor is interviewing a young girl whose dark hair hangs over her face. He shows her photos of her family in an attempt to coax her into talking about “that day”.

In an apparent flashback, we see a family arrive at their house in the country. Two girls, Su-mi and the younger Su-yeon, step out of the car and go off to play while their father walks into the house. Later, when they go inside, they are met by their new stepmother, Eun-joo. We learn that the girls' mother has died. Eun-joo tries to be conciliatory to them at first, but their clear resentment of and indifference to her drives her to become shrill and hectoring and she storms off.

Going upstairs, the girls find their rooms already filled with exact replicas of the clothing and things they have brought with them. The dinner conversation that night is brief and strained; the girls don't speak, and the father leaves early, handing Eun-joo two pills to take. She swallows them and scolds the girls, who leave.

That night Su-yeon is frightened by creaking floor-boards and her door opening by itself; she flees into her older sister's bed, telling her that someone came into her room. Su-mi gets up to investigate and finds her father asleep on the couch instead of with Eun-joo. She fixes his blanket, where she is interrupted by her stepmother, they then argue. Su-mi then goes into the kitchen for some water and goes back to bed, where she tells Su-yeon that it was their stepmother who frightened her.

Su-mi has a nightmare about a girl with long, stringy hair and bloody legs who steps into her bed. When she awakes she finds blood on the sheets and realizes that Su-yeon must be having her first menstruation. She goes to the master bedroom for towels and menstrual pads; on the way back Eun-joo stops her. She laughs upon learning of Su-yeon's first menstrual period, saying how funny it is because her own just started as well. Whilst returning to her bedroom, Su-mi realises that she herself has also started her period.

Later, Su-mi argues with her father, telling him to get rid of the wardrobe in her sister's room, but he refuses, insisting that she had promised not to bring it up.

That afternoon, Su-mi goes to an old conservatory, where she finds a trunk full of her late mother's things. She takes them back to her room and looks through the photographs. She finds that Eun-joo appears in them all, even family portraits from years past, as if she had been in their lives all along. She hides this discovery when Su-yeon walks in. Su-mi notices marks on her sister's arm, and Su-yeon admits they were caused by their stepmother.

Su-mi marches downstairs and confronts her stepmother, who calmly admits hurting Su-yeon to punish her. They fight loudly and her father comes downstairs, where he finds Su-mi alone and in tears, though she refuses to tell him what the commotion was about.

That night the girls' stepmother's brother (step-uncle) and his wife come to visit. At dinner and with the girls upstairs, Eun-joo launches into a bizarre story that supposedly occurred in her brother's youth; he quietly but angrily denies that it happened. Suddenly the uncle's wife has a seizure and sees a girl under the kitchen sink.

Matters in the house go from bad to worse, as Eun-joo takes to locking Su-yeon in her wardrobe and becomes increasingly nasty while the girls' father remains oblivious, pleading with Su-mi to be rational so that she doesn't become sick again. Finally, when Eun-joo discovers her pet bird killed in Su-yeon's bed, she snaps, and locks Su-yeon in the wardrobe as punishment even though she knows the girl is afraid of it. Su-mi discovers her sister later and promises that something like that will never happen again. Su-mi confronts her father about Eun-joo's behavior with Su-yeon. Her father yells, telling her that Su-yeon is dead and to get a hold of herself. With this revelation, Su-yeon screams and backs into a corner of the room while Su-mi denies her sister's death.

Later, Su-mi is locked in her room yelling for her sister, while Eun-joo paces and plots in her own room. Su-mi escapes from her room and begins to look for Su-yeon only to find a large bloodied bag that has been dragged through the hall. Su-mi tries to open it and leaves for a knife to cut it with, but when she returns it is gone. While searching for the bag she encounters Eun-joo who is now trying to kill her. The two fight and Su-mi is knocked out. She awakens and Eun-joo prepares to crush her with a heavy statue, but is interrupted when the father returns home. The father comes upon Su-mi and seats her on the couch, telling her to wait while he steps out of the room.

Into the room walks the real Eun-joo, and we realize that Su-mi has been imagining that she is her stepmother and that she has been hallucinating the presence of her sister, who is in fact dead. In a flashback we now see “Su-mi” dragging the bloodied sack, as well as a number of other scenes featuring Su-mi where we had previously believed it to be Eun-joo. The flashback ends and we next see Su-mi back in the psychiatric hospital, where her parents visit her.

After more flashbacks of Su-mi, her father, and her imagined stepmother and sister, as well as a scene of Su-yeon and her real mother, we see Eun-joo sitting at the dining room table. Hearing noises, she investigates Su-yeon's room where she is apparently killed by a ghostly presence that may or may not be the ghost of Su-yeon.

In the next flashback, we see the climactic apparent suicide of Su-yeon's and Su-mi's real mother. Su-yeon awakes to find her mother dead in the wardrobe, having hanged herself. The wardrobe falls on Su-yeon, immobilizing and injuring her as well as making a large bang. Eun-joo walks into the room, but does nothing to help Su-yeon.

The film ends with Su-mi walking out of the house, ignoring her own curiosity about the sound. She seems guilty about not investigating the loud bang.

The film's fractured narrative and severely unreliable narrative can make it difficult to piece together, and several key plot elements go unexplained. The narrator is Su-mi who is later revealed to be mentally ill and therefore dubious in her account of the story.

Though we are led to believe in the beginning that the main action of the movie is a flashback being told in the interview to the doctor, it in fact proceeds mainly chronologically; the “day” the doctor wants Su-mi to talk about is the day her mother and sister died.

The narrative is further confused because Su-mi hallucinates and imagines that she “is” the stepmother. Thus, when it appears the father gives pills to Eun-joo, he is actually giving them to Su-mi; the stepmother's bizarre dinner behavior is actually Su-mi trying to act like Eun-joo. This is further proven when Su-mi, Eun-joo, and Su-yeon all begin their menstrual periods on the same day. Su-mi's guilt over Su-yeon's death leads her to make instances where she must protect her sister. Su-mi kills the bird to provide her imagined stepmother with a reason to kill her sister, thus allowing her and Eun-joo to come to the film's climax of conflict between the two. It is also debatable as to whether Su-mi is really hallucinating the presence of her sister, or if she is interacting with Su-yeon's ghost (Su-yeon's actual ghost does seem to make an appearance at least once or twice in the film). The tent that the brother and his wife drive by in the road is nothing more than a tent set up by harvesters and is a common sight on Korean roads in the country.