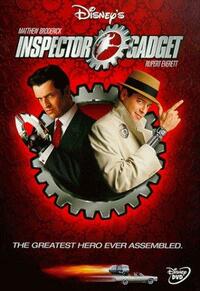 Inspector Gadget is a remake of the popular animation series about an police investigator who is the victim of an accident and is forgotten by the world. Chirurgin Brenda builds him an array of incredible biomechanical gadgets that make him able to work again and to catch criminals easier than ever.

John Brown (Matthew Broderick) is a security guard for a science lab operated by robotics expert Brenda Bradford (Joely Fisher) in Riverton, Ohio. John lives with his niece, Penny (Michelle Trachtenberg), and their dog, Brain. He hopes to be a police officer, but is denied from the force. The multi-millionaire tycoon Sanford Scolex (Rupert Everett) attacks the lab, stealing valuable equipment for the “Gadget Program” and killing Brenda's father in the process. John, who is smitten with Brenda, gives chase. The ensuing car crash brings a confrontation with Scolex, who uses a victory cigar explosive to blow up John and his beloved Chevette. But in the blast, a bowling ball in the back seat of John's car flies into the air and through the sunroof of Scolex's limo, landing directly on and crushing his hand. John is rushed to intensive care by Brenda.

John is rebuilt using electronic parts and is dubbed “Inspector Gadget.” John is given lessons by a meditating guru at the lab in relaxing his body and getting a firm grip on the workings of his gadgets, which ends in failure when he accidentally grasps the guru's testicles with a little too much force. Despite some previous success in capturing two criminals, John is assigned with many community service jobs, such as crossing guard, litter patrol, and rescuing kittens (partly because the Chief wants to avoid becoming obsolete [said earlier by the Mayor]). Meanwhile, Scolex has had a paranoid assistant named Kramer build a new, mechanical claw as his hand, and has renamed himself “Claw.” He then tries using the stolen equipment to move a robot, but fails. When Sykes calls it a lemon, Scolex has him put it on (at maximum voltage). But this fails too and Scolex concludes that he needs Brenda's help. Scolex hires Brenda as his robotics specialist (expressing lust for her in the process), and is amused to discover that John is the “lucky duck they plucked for the Gadget Program.” Later, Scolex gets a copy of Gadget's chip and inserts it into the earlier robot, which he names RoboGadget.

John investigates and discovers all about Scolex (while he infiltrates the room, Sykes is at the security desk, snoring in time with a cartoon about Homer Simpson), but while Gadget sees a moisture alarm, he overlooks an audio alarm and is captured in the process. After informing Gadget about his plans, Scolex takes his control chip and destroys it, (after Kramer passes out at the thought that he'd be a murderer by removing the chip) leaving John “dead.” Scolex then sends RoboGadget to destroy the city and have some fun. While Sikes dumps Gadget's body in the Junkyard, Brenda discovers through information given to her by RoboBrenda (a robot clone of herself, also sent to replace her as well) that Scolex murdered her father. Brenda and Penny race to save John. They discover them in the junkyard, and after Brenda kisses his cheek, John miraculously returns to life; showing that even though he is a part machine, he still has a human heart.

After a chase through the city between the “Gadgetmobile” (voiced by D.L. Hughley) and Scolex's car, John battles RoboGadget on the Roberto Clemente Bridge. RoboGadget, despite his gadgets being more war machine rather than detective work, quite literally loses his head (it falls off after John pulls a pin out of the back of RoboGadget's neck), and John tosses it in the river. Activating the “Go Go Gadget Chopper,” John flies to the roof of Scolex Industries, where Scolex prepares to make his escape with Brenda when Gadget comes around. While the helicopter hat is disabled and Gadget is lifted over a high drop, he launches the inside of a pen into the helicopter's cockpit, hitting the shutdown button on Scolex's claw and crushing the controls. Brenda and Gadget crash to the plaza below, where police await to arrest John for all of RoboGadget's crimes. Scolex tries to escape, but is caged in by the GadgetMobile. Sykes, a confused minion brought to the light by Penny, confesses alongside her that RoboGadget was impersonating the real Gadget. John is made a hero in Riverton and earns the Chief's respect, with the Chief saying a line Gadget says throughout the film,”Wowser”, followed by a salute. As Brenda and Gadget walk away, Scolex yells out,”Arrivederci, Gadget! This is not good bye. I'll get you next time, Gadget! I'll get you!” The film closes with Brenda kissing Gadget, with fireworks coming from Gadget's right foot as a sign of arousal, and with Gadgetmobile chasing a red Bug Volkswagen. The credits show RoboBrenda doing a crazed aerobics class, the headless RoboGadget running around town, Sykes being congratulated at a minion recovery group, Penny speaking to Brain(When Brain responds, he uses Don Adam's voice), and Gadget Mobile's computer screen thanking the audience for watching his movie, even though they called it Inspector Gadget. He says things working out with the red bug, whom he got married to at a drive through chapel. He's also expecting a sub-combat he's thinking of calling, “The Love Bug,” which is in no way a plug for the Walt Disney Company, although he's sure the little one will say when he's old enough,”I'm going to DisneyLand!”. Lastly, He asks everyone not to leave the theme parks just yet, as all the people in the credits make him look good.