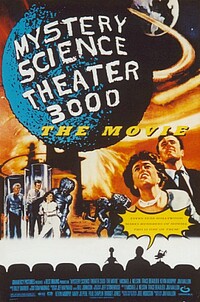 Every year Hollywood makes hundreds of movies. This is one of them.

This movie is basically a deluxe version of the popular cult-TV favorite 'Mystery Science Theater 3000.' In the movie, as in the TV-series, Dr. Clayton Forrester forces Mike Nelson and his two robots to watch bad B-Movies. As these movies are screened for them (and us), we see the theater seats and them silhouetted against the bottom of the screen. Their running commentary riffs off of the film and each other and their sophomoric jabs at humor form a continuous patter not unlike what might be heard among the audience, if these films were to be shown at a frat party. This particular episode features 'This Island Earth' (1954).