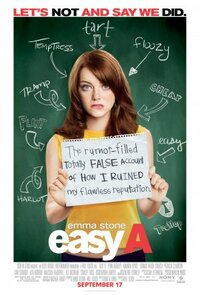 Easy A is a 2010 teen comedy film written by Bert V. Royal, directed by Will Gluck, and starring Emma Stone. Partially inspired by the novel The Scarlet Letter, the film was shot at Screen Gems studios and in Ojai, California. Screen Gems distributed with a release on September 17, 2010 (2010-09-17). It was released on DVD and Blu-ray December 21, 2010.

Olive Penderghast lies about going on a date to her best friend, Rhi, to get out of camping. Instead she hangs around the house all weekend. The following Monday, pressed by Rhi, Olive lies about losing her virginity to a college guy. Marianne, an overly enthusiastic Christian, overhears her telling the lie and soon it spreads like wildfire.

The school has a conservative church group run by Marianne who decides Olive will be their next project. The group's harassment disguised as concern comes to head at an English class run by Mr. Griffith. The class is reading The Scarlet Letter, a novel about adultery and shame. When one of the girls from the church group makes a side comment at Olive, Olive shoots back one of her own and Mr. Griffith sends her to the principal's office. During her detention she tells her friend Brandon the truth and he explains how others bully him for being gay.

Brandon comes over later and propositions Olive to pretend to sleep with him so that he will be accepted by everyone else at school. Brandon convinces Olive and they pretend to have sex at a party. Afterwards she bumps into an old crush Todd, whom she almost kissed years ago but instead lied about it when he said he was not ready.

Now after apparently sleeping with two guys and the harassment starting to get to her, Olive decides to go with the flow. She begins to wear more provocative clothing and stitches a red 'A' to everything she wears. Boys begin to give her gift cards and money to say they have done sexual things with her to increase their own popularity, which only increases her reputation.

Rhi, partly jealous of the attention Olive is getting, joins the church group protesting her. Olive is able to reconcile with Marianne but it is ruined when Marianne's boyfriend Micah gets a STD and lies that Olive gave it to him. Olive sees Mrs. Griffith, the guidance counselor and her teacher's wife, crying and she confesses that she is the one who slept with Micah. Olive promises to take the blame to save Mrs. Griffith's job and marriage.

Olive becomes disillusioned with the fact that though everyone thinks she is sleeping around, no one will actually date her. This changes when Anson comes up to her and asks her out. The date goes sour when Olive sees Rhi at the restaurant and remembers she has a crush on Anson. In the parking lot, Anson attempts to pay her off; Olive asks what they will say happened but Anson thinks he will actually get sex and tries to force himself on her. She resists and he drives off. Todd, who works at the restaurant, sees her and offers to drive her home.

Todd tells her that he does not believe the rumor mill and thinks she is actually great. He remembers how cool she was about not kissing him years ago and wishes she actually was his first kiss. Todd than asks for permission to kiss Olive but she says no, wanting to wait until she sorts out her life.

Olive goes to the boys that propositioned her and demands they admit that the rumors are all lies but they refuse. When she goes to Mrs. Griffith to make her come clean, she refuses to and implies that no one would believe Olive over her. Olive runs to Mr. Griffith and tells him the truth but immediately regrets how she did it, realizing she just destroyed a marriage.

To get everything finally in the open, she does a song and dance number at a pep rally and pretends she will be doing a sex show via web cam with Todd. In actuality she confesses what she has done. She also makes up with Rhi, apologizing for lying. When she is finishing up, Todd comes by riding a lawnmower, holding a boombox and tells her to come out. She closes her web cam confession saying she really likes Todd and maybe she will lose her virginity to him in the future but at the end of the day it is no one's business but her own. She leaves the house to kiss him and they ride off from the neighborhood on the lawnmower.