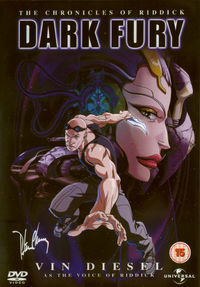 The Chronicles of Riddick: Dark Fury

"Dark Fury" shows what happened with Riddick, Jack and the Iman between "Pitch Black" and "The Chronicles of Riddick". Just escaped from the darkness their escape vessel is captured by mercenaries. But those are no normal mercenaries as they want to add Riddick to their "art" collection of the most brutal and evil criminals.

Shortly after escaping the planet from Pitch Black, Riddick, Jack and Abu (the Imam) are picked up by a ship. They quickly discover that it's a mercenary ship. Although Riddick attempts to conceal his identity from the mercenaries by impersonating William J. Johns (in Pitch Black) over the intercom, they quickly voice-print and identify him. Captured by the mercenaries, the trio of survivors rapidly discover that their captors have unusual plans for them. The ship's owner, Antonia Chillingsworth (Tress MacNeille) is a collector of criminals, whom she freezes and keeps as statues that are, in her view, art. Although the criminals are frozen, they are still alive and conscious. To her Riddick is the ultimate “masterpiece” for her collection. Riddick, Jack, and Abu must face down and fight their way through the enormous army of human and nonhuman creatures at her disposal, or they will meet a fate far more cruel than death. This film carries important character development elements for Jack (who becomes Kyra in The Chronicles of Riddick), as at the end she discovers her violent side by shooting the ship's owner just before she can kill Riddick. This discovery is clearly a source of worry for Riddick and Abu as the three escape from the mercenary ship. This manifests itself in Riddick's decision to deliver both Jack and Abu at New Mecca at the conclusion of the animation.