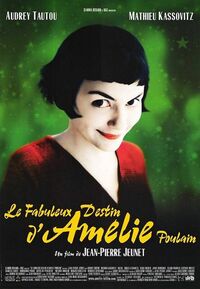 The fabulous world of Amélie is told in this colorful surrealistic film about a quirky girl with even quirkier hobbies. Audrey Tautou glows in the roll of a lifetime as a charming girl on a mission to uncover a mystery. The film achieved cult status soon after it’s release and became the most successful French production.

Amélie Poulain was a girl who grew up isolated from other children. Raphaël, her taciturn, antisocial ex-Army doctor father, mistakenly believes that she suffers from a heart condition (a mistake resulting from the increase in her heartbeat caused by the rare thrill of physical contact with her father, who only ever touches her during medical check-ups). Her mother Amandine, a neurotic schoolteacher with shaky nerves, sees to Amélie's education. Amandine dies when Amélie is young, the victim of a freak accident involving a suicidal Québécoise woman who throws herself off the top of Notre Dame Cathedral and lands on Amélie's mother. Raphaël withdraws even further as a result, and devotes his life to building a rather eccentric shrine in the garden to Amandine's memory, which houses her ashes. Left to amuse herself, Amélie develops an unusually active imagination. As a young woman, Amélie is a waitress in a small Montmartre café, The Two Windmills, run by a former circus performer. The café is staffed and frequented by a gang of eccentrics. By age 23, life for Amélie is simple; having spurned romantic relationships following a few failed efforts, she has devoted herself to simple pleasures, such as dipping her hand into sacks of grain, cracking crème brûlée with a teaspoon, skipping stones across St. Martin's Canal, trying to guess how many couples in Paris are having an orgasm at one moment (“Fifteen!”, she correctly informs the camera), and letting her imagination roam free.

L'épicerie of Monsieur Collignon, Rue des Trois Frères, Paris, used as a film location Her life begins to change on the day Princess Diana dies. Shocked upon hearing the news of Diana's death on television, Amélie drops her perfume bottle cap, knocking loose a bathroom wall tile. Behind the loose tile she finds an old metal box of childhood memorabilia hidden by a boy who lived in her apartment decades earlier. Fascinated by this find, she resolves to track down the now adult man who placed it there and return it to him, making a deal with herself in the process: if she finds him and it makes him happy, she will devote her life to bringing happiness to others. Amélie meets her reclusive neighbour, Raymond Dufayel, a painter who continually repaints Luncheon of the Boating Party (Le Déjeuner des canotiers) by Pierre-Auguste Renoir. He is known as 'the Glass Man' because of his brittle bone condition. With his help, she tracks down the former occupant, and places the box in a phone booth, ringing the number as he passes to lure him there. Upon opening the box, the man, moved to tears, has an epiphany as long-forgotten childhood memories come flooding back. She trails him to a nearby bar and observes him secretly. On seeing the positive effect she had on him, she resolves from that moment on to do good in the lives of others. Amélie becomes a secret matchmaker and guardian angel, executing complex, but hidden schemes that impact the lives of those around her with subtle, arm's length manipulation, leading to several sub-plots and episodes. She escorts a blind man to the Metro station, giving him a rich description of the street scenes he passes. She persuades her father to follow his dream of touring the world by stealing his garden gnome and having an air-hostess friend send pictures of it from all over the world. She matches a co-worker with one of the customers in the bar. She convinces the unhappy concierge of her building that the husband who abandoned her had in fact sent her a final love letter just before his death. She supports Lucien, the young man who works for Mr. Collignon, the bullying owner of the neighbourhood greengrocer. By playing practical jokes on Collignon she undermines his confidence until he questions his own sanity. However, while she is looking after others, Mr Dufayel is observing her and begins a conversation with her about his painting. He has repeatedly painted the same piece because he cannot quite capture the excluded look of the girl drinking a glass of water. They repeatedly discuss the meaning of this character and although it is never explicitly said, she comes to represent Amélie and her lonely life. Through their discussions Amélie is forced to examine her own life and her attraction to a stranger, a quirky young man who collects the discarded photographs of strangers from passport photo booths, with whom she has never spoken. When she accidentally bumps into him a second time and realizes she is smitten, she is fortunate to be on the scene to pick up his photo album when he drops it in the street. She discovers his name is Nino Quincampoix, and she plays a cat and mouse game with him around Paris before eventually anonymously returning his treasured album; however, she is too shy to actually approach him, and almost loses hope when, having finally attempted to orchestrate a proper meeting, she misinterprets events when he enters into a conversation with one of her co-workers. It takes Raymond Dufayel's insightful friendship to give her the courage to overcome her shyness and finally meet with Nino, and the two begin a relationship.