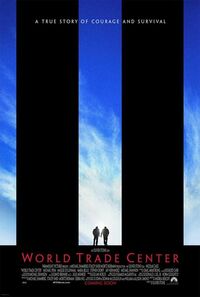 The true story of Port Authority police officers John McLoughlin and Will Jimeno, who, while patrolling the Port Authority Bus Terminal in Midtown Manhattan, see a plane fly low overhead. As all of the police officers return to the station, they see the TV, and find that the North Tower of the World Trade Center has been hit by a plane. Sergeant McLoughlin assigns many of the officers to assist in an evacuation attempt of the (still undamaged) South Tower, and they board a commandeered Metropolitan Transit Authority bus. On the bus they hear reports that the South Tower has also been hit. When they arrive at the site of the World Trade Center, they see many disturbing things, including one of the first victims jumping out of the tower to their death. As Jimeno drops off their police equipment in 5 World Trade Center, officers proceed to get safety equipment and walk into the concourse of the towers. The group consists of McLoughlin, Jimeno, Dominick Pezzulo, and Antonio Rodrigues. An officer, named Chris Amoroso, runs along to tell them of the other events such as the Pentagon being hit by what they believed to be a missile, and the South Tower being hit by another plane. The group does not believe that the South Tower has been hit. As the group prepares to enter the North Tower, the buildings begin to rumble. Looking around, McLoughlin realizes that the South Tower is collapsing onto them, and their only chance of survival is to run into the service elevator shaft. Chris trips and doesn't have time to get up. Rodrigues isn't able to get to the shaft in time. McLoughlin, Jimeno and Pezzulo manage to escape the huge amounts of dust and rubble flying down from the South Tower. But as the rubble continues to crush the elevator shaft, the three are knocked out. As the group wakes up, Pezzulo realizes he can free himself, and manages to go nearer to Jimeno in the rubble, who, along with McLoughlin, have survived the collapse of the South Tower. As Pezzulo becomes optimistic that they will live, the rumbling starts up again, as the North Tower is now collapsing as well. Although Jimeno and McLoughlin are unharmed, Pezzulo is fatally wounded and, after firing his gun up through a gap in the rubble to try to alert rescuers to their position, dies. After Jimeno and McLoughlin spend hours under the rubble, two United States Marines, Dave Karnes and Jason Thomas, who are searching for survivors of the tower collapse, find Jimeno and McLoughlin and call for help to dig them out. Their families are called and told that their husbands have walked out of the rubble in perfect health, but this is wrong; in fact, they are both in danger of dying. When the wives arrive, they are told that their husbands are in the garage and rush to meet them. McLoughlin's family manages to find him just before he is pulled into the operating room to be put in a medically induced coma. Two years later, as they attend a celebration to receive an award for courage, the families are happy again that the two officers, McLoughlin and Jimeno, survived the biggest terrorist attack in US history.