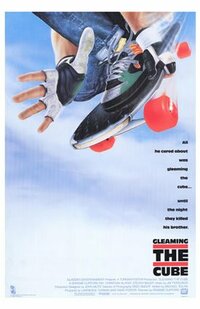 The cult classic 80’s B-film where the slacker skateboarder gets off his but and cases down criminals. A skateboarding boy named Brian played by Christian Slater has a pretty normal life until his brother dies. The cops think it’s a suicide yet he won’t believe it and follows some Chinese guys he thinks did it when he gets into a lot of trouble and has to ride his skateboard to save the day.

Gleaming the Cube (also known as A Brother's Justice and Skate or Die) is an American movie released in 1989. It featured Christian Slater as a teenage skateboarder investigating the death of his adopted Vietnamese brother. Though set in contemporary Orange County, the movie includes story methods common to westerns and Film Noir.

Among the famous skateboarders who appear in the movie are Rodney Mullen, Tony Hawk, and Stacy Peralta and his crew.

The film received only a moderate release in the United States from 20th Century Studios (in 469 theaters). Although the film had a relatively low box office turnout, Gleaming the Cube garnered a significant cult following after its theatrical release, both through basic cable replays on networks such as USA and the burgeoning VHS (and later DVD) market.