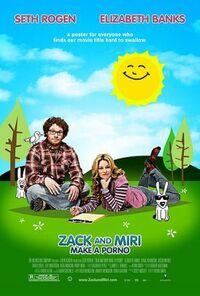 Zack Brown (Seth Rogen) and Miriam “Miri” Linky (Elizabeth Banks) are roommates in Monroeville, Pennsylvania (a Pittsburgh suburb). They have been friends since the first grade. Despite Miri working at the local shopping mall and Zack working at a coffee shop, they have not paid their utility bills in months, with Zack devoting much of his free time to a fanatic following of the Pittsburgh Penguins and his status in the community amateur hockey team, the Monroeville Zombies. After work, their water gets turned off before they go to their high school reunion.

At the reunion, Miri attempts to seduce her attractive former classmate Bobby Long (Brandon Routh), while Zack strikes up a conversation with Brandon St. Randy (Justin Long), who reveals that he is a gay porn star, and Bobby's boyfriend. After returning home from the reunion, the apartment's electricity is turned off. Inspired by a successful viral video that was filmed by a pair of teenage boys as Miri changed in Zack's place of work for the reunion (revealing that she wore unattractive underwear, “granny panties”), and emboldened by the cultural mainstreaming of pornographic entertainment, Zack convinces Miri that they should film a pornographic movie to earn money.

Gathering a group of acquaintances and hired help as the cast and crew, they decide to film a pornographic Star Wars parody, entitled Star Whores. Delaney (Craig Robinson), the film's producer and Zack's coworker, rents film equipment and a building to use as a studio. When they return to the studio after the first night of filming, the building is being demolished, with all the equipment and costumes inside. Later at the coffee shop where Zack works, he realizes that his boss threatened to install a hidden camera, which Zack finds, and decides to use it to replace their lost film equipment. Zack retools his film to take place in the coffee shop, and the group shoots the film after hours.

Despite their insistence to one another that they would not let sex with each other affect their friendship, Zack and Miri soon develop romantic feelings for each other and their sex scene is plainly lovemaking though they do not admit it. Later that evening, Zack and Miri are at home when suddenly their apartment's electricity and water service return. The rest of the actors and crew appear at the apartment to reveal that they pooled their resources to pay one month of their bills and have come over to throw them a party. At the party, one of the other actresses, Stacey (Katie Morgan), asks Miri if it is okay for her to ask Zack to have sex as a way to prepare for her scene with him the next day. Although Miri has realized that she has developed feelings for Zack, she tells Stacey it is okay to ask him. When Stacey relates this to Zack, the two retreat to Zack's bedroom, much to Miri's dismay.

The next evening, Zack is preparing to film a scene between Stacey and another actor, Lester (Jason Mewes), that was supposed to have been with Lester and Miri. Zack is upset when Miri arrives and insists on shooting the scene as originally planned. In the back, Zack asks if she is doing this as a form of retaliation, pointing out that Stacey told him that Miri didn't mind her sleeping with Zack. Miri says that she didn't mind that Stacey merely made the offer to sleep with him. Perceiving this to have been some type of test, Zack admits that during their sex scene there was an emotional connection between them, and that he loves Miri. When Miri does not reciprocate, Zack storms out of the coffee shop, quitting the film and his job. When Miri returns home later, she finds Zack has moved out of the apartment.

Three months later, Delaney goes to see Zack, who has moved on to an exterior concessions job at Mellon Arena during Pittsburgh Penguins games. Delaney convinces him to come to Delaney's home to see the unfinished movie and help complete it. Zack agrees, and as Delaney and Deacon (Jeff Anderson) the cameraman explain, Zack learns that Miri never filmed her sex scene with Lester. Zack goes to Miri's apartment and reveals to her that he never slept with Stacey; instead, they talked about Miri all night. He pours his heart out to Miri, proclaiming his love for her, which she reciprocates.