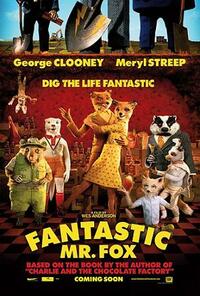 Fantastic Mr. Fox is visionary director Wes Anderson’s first animated film, utilizing classic handmade stop-motion techniques to tell the story of the best-selling children’s book by Roald Dahl. It tells the story of Mr.Fox, eluding three evil farmers, and, out of self defense, raiding their warehouses, while they keep trying to starve him, his family and the other underground animals.

In order to feed his family, Mr. Fox (George Clooney) is forced to steal from the farmers. Chickens, ducks, turkeys keep disappearing from right under their noses – until the farmers form a pact to strike back. They try to ambush him, but Fox manages to escape. It costs him his tail, though. And finally it becomes more than evident: something needs to be done. Luckily he has Mrs.Fox (Meryl Streep) and his cubs to help him.

Phase Two of the farmers’ plan involves digging into the ground to get to the fox burrow – to no avail, family Fox just digs deeper and deeper and remains out of reach, no matter how many bulldozers the farmers use. Frustrated, the farmers decide it might be best to just wait. They keep watch at the entrances of the tunnels, trapping family Fox inside – alongside Badger (Bill Murray), Mole and all of the other animals living underground as well…

After three days of starving, Mr. Fox developes a plan. After careful calculation, he and his children round up the other animals and together they start digging up – and end up in Boggis’ chicken house. They steal some chickens and disappear again, without leaving any trace at all. But how many times will the gang be able to pull it off? What if luck runs out? Never you worry, Mr. Fox has made it his responsibility to take care of his family and friends – and Mr. Fox is fantastic.

Originally, Cate Blanchett was set to play the part of Mrs. Fox. Before filming began, she withdrew from production. Reasons have not been disclosed yet.