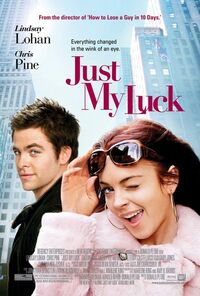 Just My Luck is a 2006 American romantic comedy film directed by Donald Petrie and written by I. Marlene King and Amy B. Harris. The film stars Lindsay Lohan and Chris Pine as the main characters. Lohan stars as Ashley, the luckiest girl in Manhattan, New York. She loses her luck after kissing Jake, portrayed by Pine, at a masquerade bash.

The film is about always lucky and popular Ashley Albright (Lindsay Lohan) who has an extremely fortunate life and is always experiencing remarkable strokes of luck. The audience is also introduced to Jake Hardin (Chris Pine), who is followed by bad luck wherever he goes. He manages a small music group called McFly.

Persistent in her efforts to hold onto a client, Ashley manages to sell Damon Phillips (Faizon Love) on the idea of a masquerade party. When Ashley's boss, Peggy, learns of the plan, she is, to Ashley's surprise, impressed with the idea, leaving her with the task of organizing the party independently. Jake, hearing of the party and of the number of possible sponsors who could be there, hatches a plan to attend, in order to meet a very famous man (Phillips) who could publicise his band. He poses as a dancer for the masquerade party and gains entry.

During the party, Ashley is confronted by a fortune teller who warns her she will soon be struck by bad luck. As Jake wanders around the party, he is struck by Ashley's beauty and asks her to join him in a dance, during which they kiss. Neither can see the other's face, as they are both wearing masks. During the kiss, their luck is switched: Jake gets Ashley's good luck and Ashley gets Jake's normally rotten luck. Jake spots Phillips and saves him from a taxi cab that nearly hit him. By way of saying thank you, Phillips, who is in charge of a major record company, signs up McFly. Meanwhile, Ashley's bad luck kicks in and she goes to jail (the guy she set her boss up with for the party turns out to be a prostitute).

Desperate to regain her luck, Ashley revisits the fortune teller, who explains that, in order for her life to return to what it was before, she must again kiss the person she kissed at the party. Ashley begins hunting down all the dancers from the company who had supplied the dancers at the party. While on her search, Ashley tries to get some food from a cafe but is rejected because she doesn't have enough money. She creates mass chaos (due to bad luck) and makes a mad dash out of the cafe with the help of Jake, who offers Ashley his previous job as a janitor/food delivery person at the bowling alley. Ashley, desperate for a job, accepts immediately.

Later, Jake takes Ashley to the place where McFly is practicing. She discovers that Jake is the one who has stolen her luck. Seizing her chance, she kisses him, whereupon he gets his bad luck back; Ashley's luck has returned. That night, she thinks hard about her life and about how Jake had put his (her) good fortune to use. She decides that her life was more enjoyable without luck and goes to Jake's first concert for McFly, during which things aren't running smoothly.

Ashley kisses Jake, given luck again, and the concert is saved. Ashley decides to end contact with Jake, as she doesn't want their luck to be switched again; she believes Jake put the good luck to better use than she ever did. She goes to the railway station, where Jake finds her and tries to convince her that she was all he wanted since the party. They then kiss each other relentlessly, causing their luck to swap so quickly that they no longer know who has the good luck and who has the bad. When they see Jake's little cousin Katy and both of them kiss her at the same time, she gets all the luck and wins a scratch card lottery of twenty-five dollars. Later, when they find a quarter, they decide that they still have some luck left. But only seconds later, they are drenched by a broken water line.